That's what girls are for? 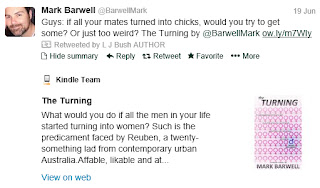 Guys: if all your mates turned into chicks, would you try to get some? Or just too weird?

It was an ad for The Turning by Mark Barwell, also the author of the tweet. I'm not going to talk about the book, but since I'm about to say not-so-nice things about the tweet, I thought I'd give you a bit of the description at Amazon, in case you're interested.


What would you do if all the men in your life started turning into women? Such is the predicament faced by Reuben, a twenty-something lad from contemporary urban Australia. Affable, likable and at least moderately handsome, Reuben is a bit miffed with life. His career has stalled, he's mired firmly in Best Friends Country with the loins-achingly beautiful Deidre, and his best mate Morrie's shag-happy ways are making Reuben wonder why he ever liked the womanising man-whore in the first place. So when a terrorist group of Militant Feminists unleashes a terrible biological weapon upon the world, a weapon guaranteed to turn every single man into a woman, Reuben can't help but feel that there may in fact be a great steaming turd in his hat. As it were.

But the tweet...If all of your male friends turned into women...the question Barwell asks is..."would you try to get some?"

Because, that's what girls are for, right?

Seriously, it put this picture in my head of men running around a chicken coop without pants on trying to "get some" from any and all the chicks they can manage to hold down.

I found this a tad disconcerting, having just read about the latest study showing that neither men nor women, but mostly not the men, could tell the difference between statements made in men's magazines and statements made by convicted rapists.

I get that it's biological. I get that men are constantly in sex mode and every woman they hear coming is a potential romp partner, until they see her face and weight, at which point only some of them are. But still. That's what women are for, to the vast majority of men in this world. Women are walking sets of orifices for male pleasure.

If all your friends turned into women, you wouldn't think of them the same, would you? You wouldn't still want to play basketball with them, or talk politics, certainly not gym talk, and you wouldn't want their opinions on anything important. Nope. Once they sprout breasts and a vagina, your main concern is whether or not you should try to "get some."

From the pretty ones, at least.

Because another study has shown that men prefer to marry less attractive women and just boink the pretty ones. Still, all women are for sex. You just trust the ugly [relative to your own looks, we presume] ones not to be unfaithful to you.

Men appear to me to be sexually frustrated. They think of women as purely sexual objects. That's what they're for. And they don't seem to understand why women aren't constantly happy to oblige.

Some men just assume all women really want to have sex with them--they're just pretending to be disgusted by their cocky overtures. And because of that, some men "get some" whether the girl admits she wants to give it to him or not. Some men just walk around pissed off all the time because women won't lay down on the sidewalk and spread their legs when they walk past. Because that's what girls are for.

It's enough to make you feel sorry for them, biologically speaking, of course. Cursed, they are. Clearly.

So, that leads to the question...Gals: if all of your friends became men...?

Email ThisBlogThis!Share to TwitterShare to FacebookShare to Pinterest
Labels: Mark Barwell, The Turning