A lot has happened since my last post on sewing. I bought a new serger. I took (and continue to take) online classes. I created a pattern from a favorite tee and made one. And I've done some other projects. I'm going to show it all off now. Well, except for the serger. It's a serger; nothing special.

And next week, or in a few days, maybe, I'm going to write another post about writing and sewing, because they have a lot in common, as it turns out.

Anyway, there was so much that I didn't remember about sewing when I made that first project. I'd even forgotten about clipping curves! Now that I look back at it, I don't think I'll wear that top. It's almost too awful to donate. But live and learn.

So, my next project (never being one to start slow) was to create a pattern from my favorite tee. I laid the shirt out on brown Kraft paper (laid atop my cardboard cutting mat) and poked pin holes outlining the front and back. Then I connected the dots, added seam allowances, and traced it all onto some fancy pattern paper I ordered from Amazon. 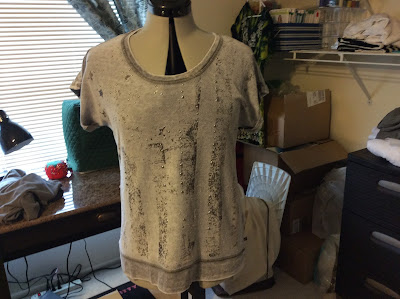 I think I got it at Target or Kohl's. Unfortunately, I cut the tag off long ago so I can't applaud the company that made it. It's so comfortable and drapey. I love it! And I want more like it. I was...only somewhat successful. But of course, you have to choose the right fabric.

Here's what I made: 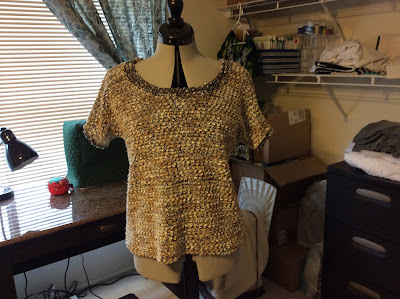 It's way too short because, well, I don't know why. It was just not even on the hem and I had to cut it a lot to make it even. The fabric I chose was a very loose, open-weave knit. Sewing it was a real pain in the ass. The fabric kept getting pulled down into the machine under the needle. I was taking classes by this time and learned that I could get stabilizer to put under it to keep that from happening. I did that for the hem. Luckily, you can't actually see the stitching on the neck and sleeves so you can't tell what an awful job I did!

Here's a close up of the fabric. 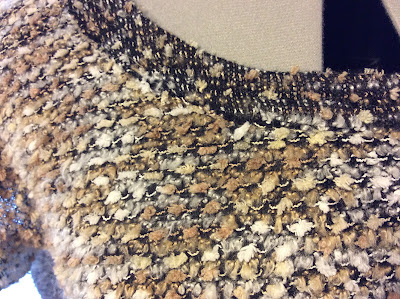 I used the wrong side of the fabric for the facing and turned up the sleeve hems that way, too. But I felt like it would cut my body in half if it had the black line at the bottom hem, so I turned that under. I really like this top and will wear it a lot.

After that, I took this dress I bought from Zulily by a company called Aster by Fermiana and turned it into a tunic. 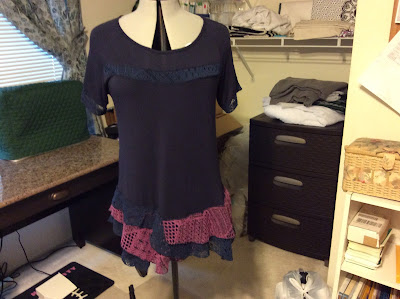 It was not easy! The lace on the bottom was in two long pieces. I cut them off and pinned them up higher and just, well, did my best. It's not even, but it wasn't even when it was a dress. It's meant to look wonky. The band at the top, across the chest, was a strip of lace, so I took some of the fabric I'd cut off from the length and sewed it on--very sloppily--behind it, so it wasn't see-through.

I thought myself rather clever by this point. But held back on draping and designing my own tunic, figuring I still had quite a lot to learn. The more classes you take, the more you realize how clueless you are.

I mean, not only had I forgotten about clipping curves, I didn't know there were different types of needles and pins for woven and knit fabrics. I didn't even know the difference really between the two. I kept calling woven fabric cotton, and knit, knit. But of course, knit fabrics are also made of cotton.

The classes at Craft University and Craftsy are excellent! Right now, I'm taking Teach Yourself to Sew on DVD from Threads magazine.

Anyway, so I thought I'd make some more projects from ready made patterns, hoping I would learn more before I made some more patterns of my own.

This was my next project: 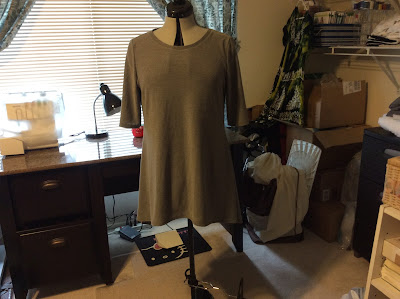 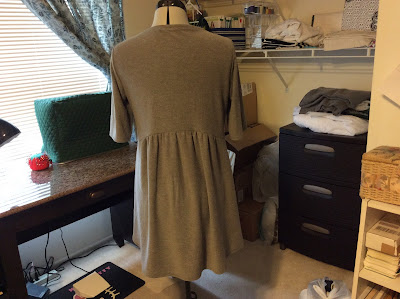 I really like how it turned out. Of course, I couldn't follow the instructions exactly because I wanted to serge the seams and put the sleeve in flat instead of in the round. I basted each set of seams first, and then tried it on. If it looked good, I took it to the serger. Below, you can see how I learned to use a strip of stabilizer for the shoulder seams. 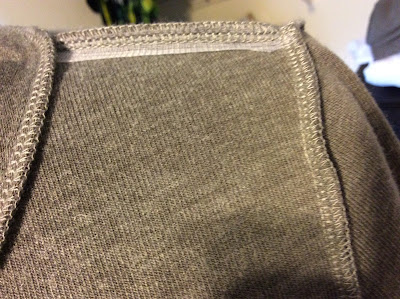 And below is just some serged seams. They make it so much cleaner and professional. You can see that I used the typical right side of this jersey as the wrong side. At first, I thought this was the wrong side, but as I learned from my classes, the side with the ridges is actually the right, or knit, side. But this top looks much nicer with the pearl side as the right side. 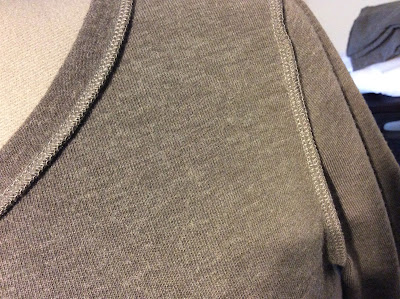 I purchased a twin needle for the hem, but when I tried it out on some extra fabric, I couldn't get it to not leave a ridge between the two rows of stitching. One of my instructors explained how to keep it from doing that--you make sure the left needle is just off the raw edge of the fabric, but that didn't help at all. Luckily, I have this cool stretch stitch on my machine. Another instructor called it the jersey stitch. It's decorative, and allows for stretch. I love it! 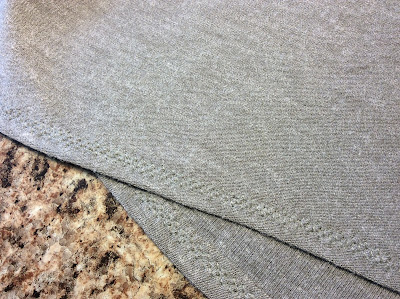 I'll try out that twin needle on some other projects and see if I can't make some use of it.

Another thing I did was make a cover for my sewing machine. 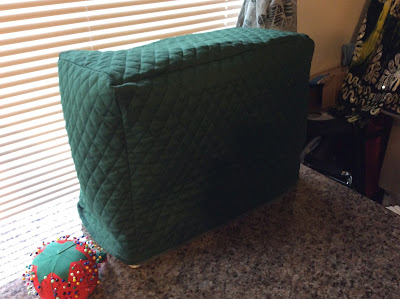 The cover that came with the machine is a hard, molded piece of plastic. I stored it away in a closet. I wanted something that I could fold up and set aside and put back on easily. I'm going to make another for the serger in a bit.

I'm having a great time sewing. I think the biggest lesson I've learned is to go slow.

My local Hancock Fabrics is going out of business. They all are, though, aren't they? I've been checking in every week or so, collecting fabrics at discounted prices. I ended up buying a storage cabinet to keep it all in. By the time they close, I'll have enough fabric for dozens of projects! The only problem now is that I don't think I'll have enough room in my closet for it all.

I also discovered this super thick blanket yarn by Bernat at Jo-Ann Fabric and Craft. When football season starts, I'm going to crochet another afghan. It still won't really be cool enough here in Florida to work with yarn on your lap, but I'm certainly not going to do it this summer.

This is all well and good. I'm being creative. And I am still writing. I think I may have gotten over the worst part of losing faith in the whole thing and I've made some headway on my latest manuscripts. I think the sewing helps, but it looks like I'll be lucky if I get two books out this year.

I hope all of your creative endeavors bring you happiness, too!