Beauty is only for pretty girls...we knew this all along...

For years, maybe since the dawn of time, we've come up with sayings to make ordinary (if not downright ugly) girls feel better about themselves.

"Beauty is only skin deep," we say. Which means of course that a girl can be pretty, but she could still be a horrible person. This saying was never more than an "also-ran" award. I mean, so what? She's still pretty and you're still ugly.

"You're beautiful on the inside." And that's supposed to make us feel better? Don't worry honey, you may be ugly as all get out on the outside, but it's the inside that really counts. Right. None of us really believe that one either.

Well, Bare Escentuals, maker of Bare Minerals make-up, has decided it's time we all abandon these ridiculous attempts at making the ordinary girls feel better about themselves. They're ugly and there's nothing they can do about that. They've decide to concentrate on the pretty ones.

That's right. Pretty girls are pretty on the outside. And they're beautiful when they use their pretty to do great things.

Keri stands there looking physically gorgeous and telling us that beauty is not about being prettier than someone else, it's about "being interested in the world, and people, and caring." Keri lives for thrills and getting out of her comfort zone. She speaks Spanish, Portuguese and Farsi. Good for her. But she's beautiful!

Lauren is stunning. And she's a firefighter, too. Is this supposed to make me forget she's beautiful? "Nothing that's considered physically beautiful is timeless," she says. "When people say beauty is timeless they're not talking about what's going on here," she motions to her face, "they're talking about a quality of an individual that transcends. Confidence, and wisdom, and somebody that's fun and funny, like, embraces all different people and makes people comfortable," she just goes on and on talking about what beauty is supposed to be. She's a beautiful woman trying to make us all feel better by insinuating that we could be as beautiful as she is, if we'd just be nicer to people.

Just once I'd like to see an ordinary or even societally-considered ugly girl on a commercial talking about beauty. Because that's what advertisers are usually pretending to say. They're pretending that they're telling us that beauty isn't about what you look like. They're lying. 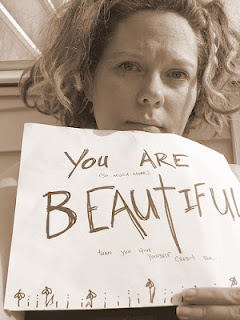 *
But Bare Escentuals is now actually saying that, yes, to be beautiful, you also have to be pretty. "Pretty is what you are. Beauty is what you do with it."

...they held a blind casting call for women ages 20 to 60. Models completed a questionnaire about themselves, and based on their answers, 78 women were brought in for interviews with casting agents, which was eventually narrowed down to five models. Bare Escentuals reps didn’t see the women who applied until they were selected for the campaign.

Don't think that's true? Here's what the blind casting call was really all about:

Models and actresses get a bad rap - as just pretty faces. Having worked in the business, we were determined to find women who were much more to represent the campagin - women that were true forces of beauty.

We wanted to find the beauty in a sea of pretty.

To that end, we went about casting in a different way. So we started by creating a space where the women wouldn't feel pressured by being evaluated by the [way they] looked. And we weren't distracted by their looks. Hence, the blind casting idea was born. For three days, we just listened from behind a wall to over 78 women tell their stories. From those women, we booked 5 forces of beauty without every seeing their faces.

Sounds like such a hard job, trying to find beauty in a sea of merely pretty.

Beauty is what pretty girls do with their pretty. Thanks for reaffirming what we always knew, Bare Escentuals.

Yes, we all knew it all along. Nobody was fooling us. Finally someone has come out and admitted it.

*About the photo:
Anathea Utley took this photo. She titled it "beautiful"

She says, "I've never been able to apply society's version of 'beautiful' to myself, even though I tried and tried and distroyed [sic] myself over it for years. It's part of what the dreads are about, just departing from the weird vanity of our culture and doing something spiritual and truly beautiful and connected with the earth and something larger than myself. I don't want my girls to grow up [to] think that they have to compensate for our culture's beauty propaganda.
Because they don't have to.
Because they're already so much more beautiful than that.
And so are you."
Posted by Dianna Dann Narciso at 9:25 AM