Where death is held more sacred than life...

I love a good cemetery. It's no surprise to me that in my next two novels (Camelia and JoJo's Ghost) there will be scenes set in cemeteries. But not the kind I like.


I like shady, hilly graveyards peppered with ancient, moss-covered oaks. They're meant to be meandered through; they invite long visits. I want to see a hundred statues of despondent angels, cherubs, robed sons of God with heaven-cast gazes, and creepy little girls. I want mausoleums. I want a place in which ghosts would roam. Where the hairs on the back of your neck often prickle and you feel like you're being watched. Where death is held more sacred than life.

But putting a cemetery like that in my books won't do. No, I'm going for a cemetery very much like Webb Cemetery in Webb Alabama, just across from Webb Baptist Church. It's plain. It's old. It's unkempt. It's depressingly awful. And it's wonderful.

﻿﻿
Despite knowing that my husband thought I was out-of-my-mind morbid, I made him drive me up to Alabama to see that cemetery. There's a very good reason I chose that one, of course. And I'm so glad that it's perfectly horrifying.

Sure, it has all the usual tear-inducing tombstones that most others have. The children who died in their birth year. The two-year olds. The three-year olds. The families who lost five children under the age of six. But when you're interred on a grassy slope overlooking a woodsy copse or a pond, you've got it eternally made.

Try being two-year old Austin Lee McNeal, lying in the back corner, far from one of the two trees in a barren wasteland of deadness. Up against a back fence and a ramshackle trailer, home of dogs threatening anyone who dares to visit. You know how much your mommy loved you because she's left toy trucks and a plastic dinosaur for you. But the angel at your feet has fallen and broken and no one's come by recently to set it right.

That's the grave of novels, my friend! 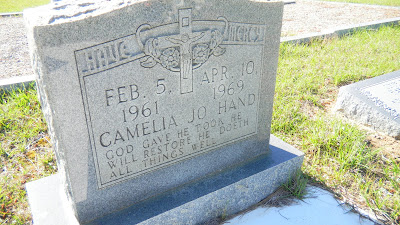 Maybe it's strange to drive from the Space Coast to Webb, Alabama just to see a tombstone in person instead of on the Internet. But you get to do these sorts of odd things when you're a writer. You can call it research, even if it's also personally gratifying--even if it heals you in some way.

But isn't that what some novels do for us? They close up wounds even as we slice them open to bleed out the horror of our suffering onto the page. I don't think I was made whole by standing in front of that tombstone. But I think I will be when I write the story of standing there.

Call me crazy; I'm a writer.
Posted by Dianna Dann Narciso at 6:19 PM