Epcot's Food & Wine Festival...stuffing my way around the world!

Another year, another pig out at the Epcot International Food & Wine Festival. The festival runs through November 10, so you've got plenty of time to get your snails and sliders. Look, if you go to that link above, you'll see that there's plenty to do at the festival. Concerts, demonstrations, getting shitfaced on wine and beer and making an ass of yourself. But hubs and I go for the food. Just the food.

I highlighted twenty-one things to eat on the list of foods offered this year. I managed fifteen of them. Not too bad. I even remembered to take pictures of some of the stuff. I think we really impressed a couple who sat at our table at the USA Hops & Barley booth. Taking a picture of our food, discussing at length the complete lack of lobster in the lobster alfredo, mentioning that I'm a famous blogger, etc. really got them talking and acting like they, too, should be treating the day as a giant critic's paradise.

Here's the rundown (Maybe even in the right order):
1. We went counter clockwise this year, which was a bit odd. But it had the result of us being very hungry at booths we'd been stuffed like turkeys at in years past. (Which reminds me that I had a dream I was cooking a turkey and wondered why, as I carried it in a bag [it's a dream, they're weird like that] to the family dinner, it was so light. Turns out I'd forgotten to stuff it. I was devastated. I don't know why. I never stuff them in real life. Anyway, the dream makes absolutely no sense in relation to being stuffed at the festival, does it?)

I think I have to start again.

Here's the rundown:
1. Scotland.
I was starving! We had the vegetarian haggis with neeps and tatties. (We are so Scots now.) Neeps are rutabagas, mashed like potatoes; they tasted like cauliflower to me. And tatties are just what they sound like, potatoes. Also mashed. Let me tell you, if the vegetarian haggis is anything like real haggis, I'm a haggis fan! It had the texture of scrapple, something else I'm a big fan of. It was just the right amount of spicy. I'd totally eat that again. The neeps and tatties were yummy too. I ate too much, though.

We also had the potato pancake with smoked Scottish salmon and herb sour cream. Lovely. Hubs thought the salmon was too salty, but I didn't.

2. Puerto Rico
Ensalada de carrucho, or conch salad with onion, tomato, and cilantro. Our salad came in a paper cone and it was tart and sour and I guess those little white nubby granules with no taste were bits of conch. I've had conch. In chowder at least. I think I had a conch sandwich once--the conch was in a patty, like a crab cake. So, I get that it has no flavor. I wouldn't eat this again.

Tostones (fried plantains with mayo ketchup). They gave us three large yellow patties of fried deliciousness; and this mayo ketchup stuff? Yum mee! I ate too much, considering I had seventeen items left on my list.

Then, we had the FlanCocho. Oh, my, gawd! It's described as vanilla caramel custard with chocolate coffee cake. What is was, was a thin gooey brownie with ooey yummy custard on top, drowned in caramel sauce. This one even passed the Hubs test! We ate the crap out of that. List of eats be damned!

3. Canada. Oh, Canada.
Here we had the filet mignon (of beef, alas; not moose*) with truffle butter sauce. Now, I can get filet mignon any time I want, but I wanted to try the truffle butter sauce. And for $7.25, I thought I was going to get some. But if any truffles went into the making of that scant drizzle of buttery sauce on my hunk of meat, it was of the holistic variety.

There were mushrooms. Garden variety mushrooms that Hubs thought were too salty (I'm sensing a pattern). Do you suppose those were the truffles? Right. I don't think you get truffles in portions that generous. And they probably don't look like this.

4. Ireland.
The reason I go to the Food & Wine Festival year after year is for this! Warm chocolate pudding with Kerry gold Irish cream Liqueur Custard. Oh. My. Lord. Hubs doesn't even eat any of it. All mine! All mine! I apologize for not taking a picture. You forget about that sort of thing when you've got one of these babies on a plate.

I am tempted to hunt the Internet Tubes in search of a recipe for this, but then I will get fat again and I really don't want to get fat again. Still...

6. Belgium!
You know what Belgium means. Waffles. We had the Belgian waffle with warm chocolate ganache and whipped cream. Sadly, I did not understand that the ganache would be drizzled on it like this: 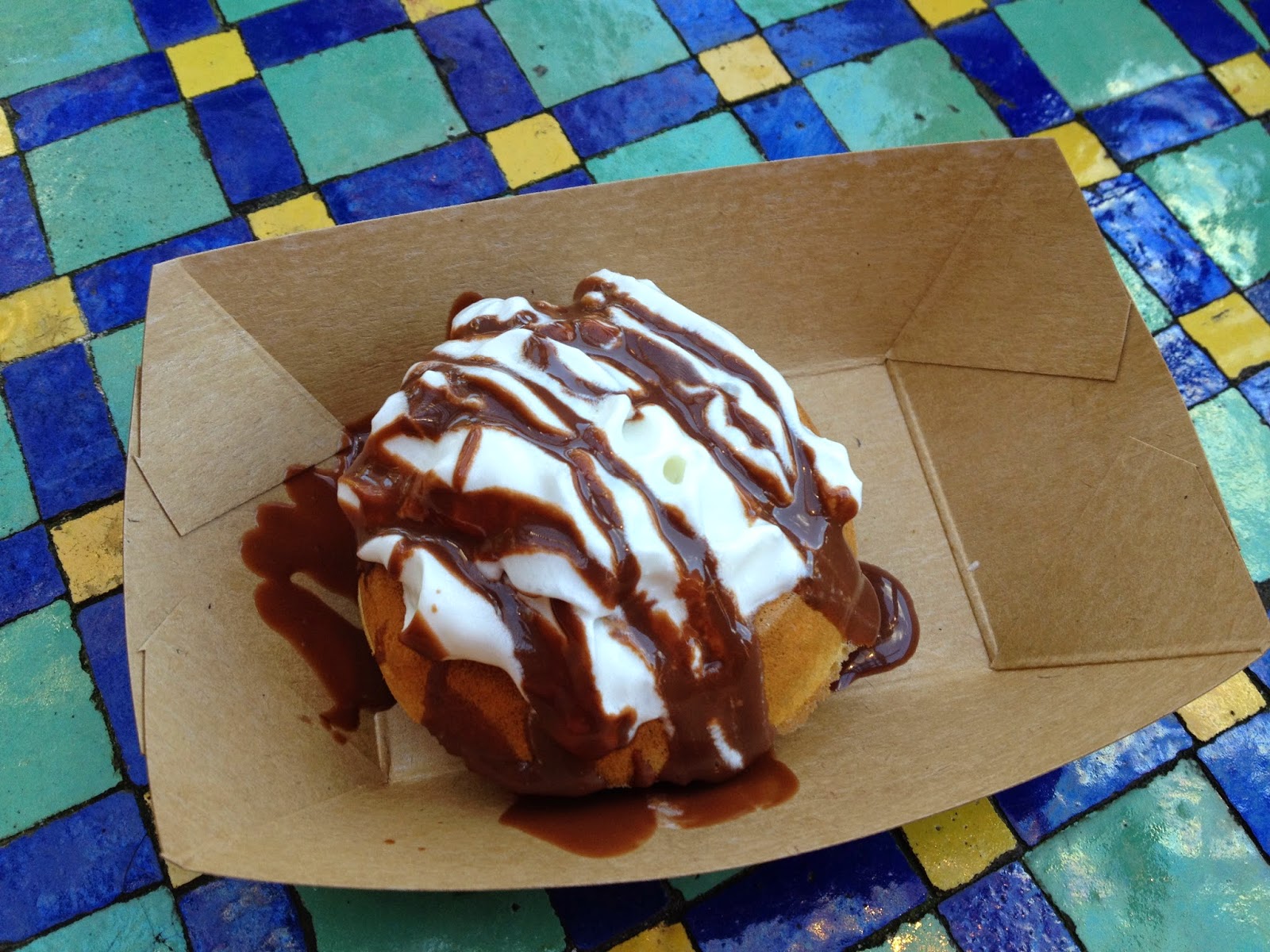 I was under the impression it would be slathered...

That being said, the waffle was light and airy and sweet, like a raised doughnut. And the ganache didn't taste like Hershey's syrup. Good thing. When you pay $3.50 for a doughnut, you expect real ganache. Am I right?

7. Hops & Barley.
This is really the USA booth. At least, it's in USA land. Don't you wonder why they even have a USA land at Epcot? Like we can't walk out of the park and...be there. Anyway, I wanted to try the lobster alfredo, because I like lobster. And I like alfredo! Here's what I got: 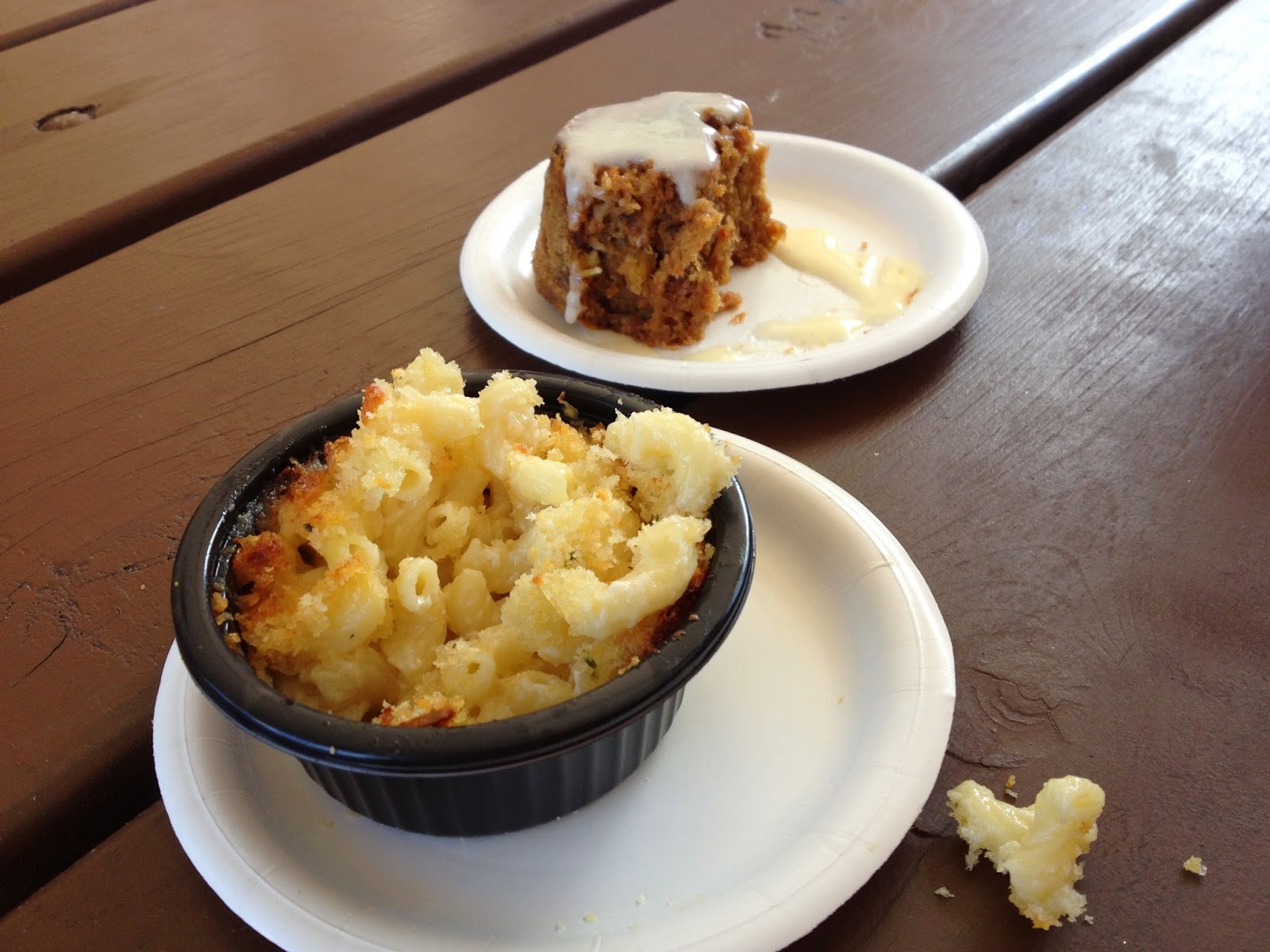 That's right. Mac n Cheese. Macaroni and cheese! I dug all in there and there was no lobster. None.

But the carrot cake with Craisins and cream cheese icing was to DIE for. DIE, I tell you! DIE! I would have eaten more, but it was so sweet! And you see the thin drizzle of cream cheese icing? Tasted like it was slathered with an inch thick layer of the stuff. DIEDIEDIE!

8. Poland.
Another reason I go to the festival is for sausage. My family doesn't like sausage, so I never get to have it. I got the kielbasa and potato pierogi with caramelized onions and sour cream. The kielbasa was divine as always. But the pierogi was bland and pasty. It might have been because I was already full. Things just taste better when you're hungry.

9. Singapore.
Here we got the mahi mahi because, like I said, Hubs likes fish and this wasn't all about me, after all. <snicker> The mahi was served with jasmine rice and "Singa" sauce. Here's a picture taken after we'd already eaten most of it. Sorry about that. 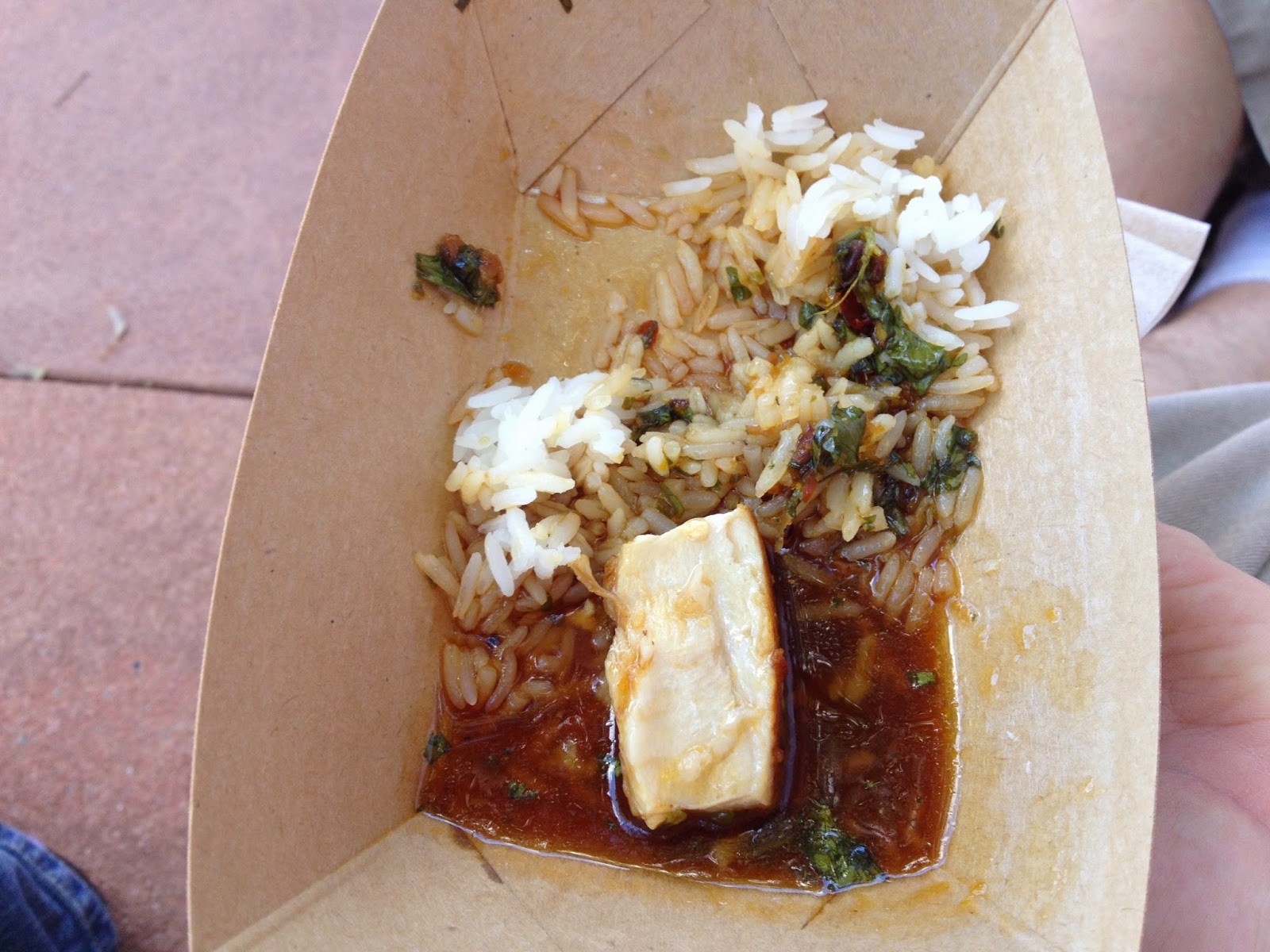 You're wondering what "Singa" sauce is, aren't you? Well, I'm pretty sure it's soy sauce with lemon juice in it. I didn't like it. Blech. But, hey, the fish was for Hubs, anyway.

10. Africa.
We swore we'd never eat at Africa again after the first time. But this year they had beef tenderloin tips with okra, jalapenos, tomato, and pap. I had to try it! It was fabulous! 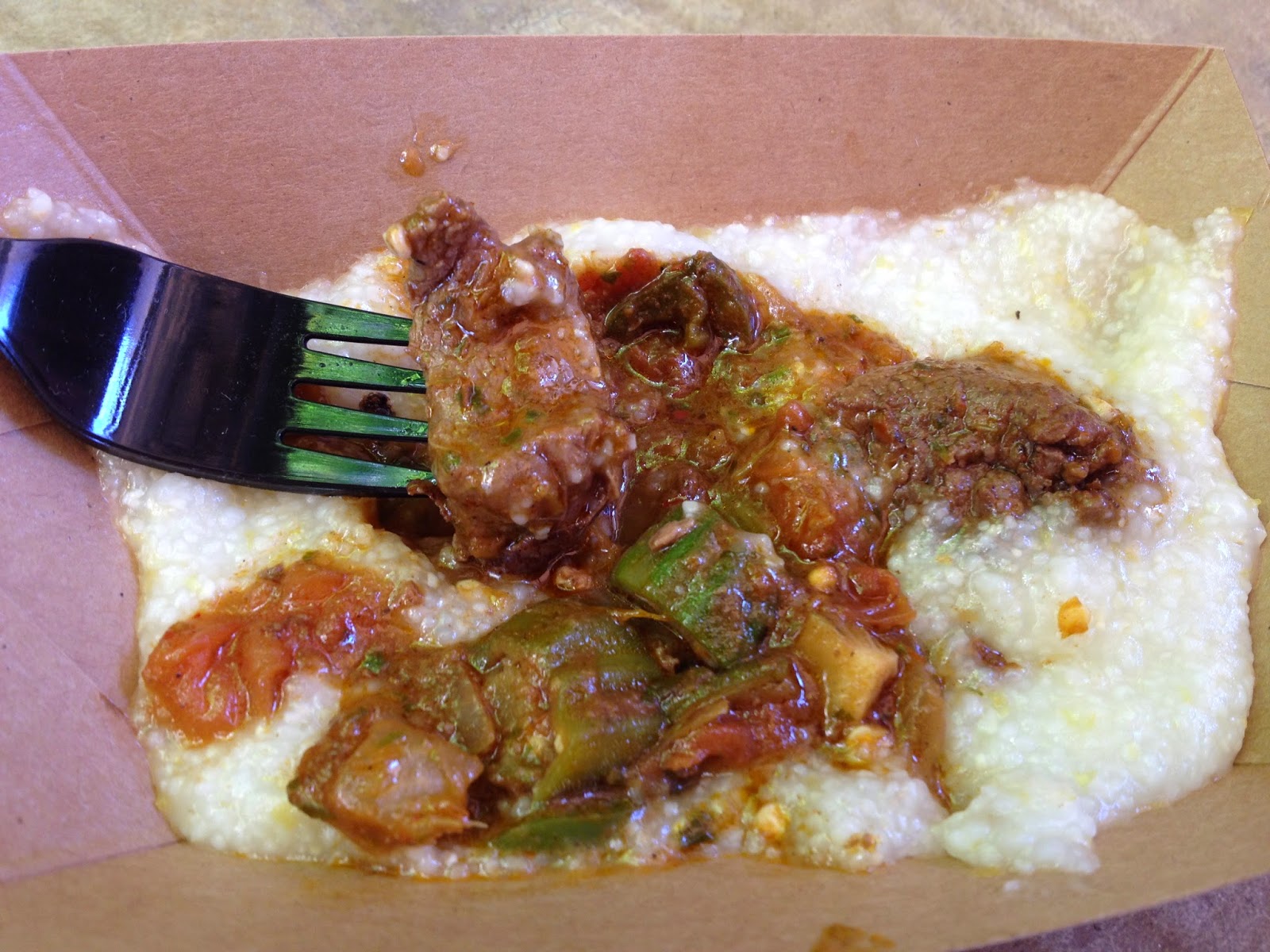 Imagine how thrilled I was to find out pap was grits! This was luscious and spicy and wonderful and I was so full it was hard to eat enough of it! But I did my best.

11. South Korea.
I wanted to try kimchi. When I was in college, one of my history profs said he was in South Korea during the war and he told us about how they made kimchi by burying cabbage in the ground in pots to let it ferment. He described the smell of the process as disgusting. I expected it to be, at least, soft. But the cabbage was raw. And spicy. And tart. Not awful.

It was on a spicy, dense hot dog. 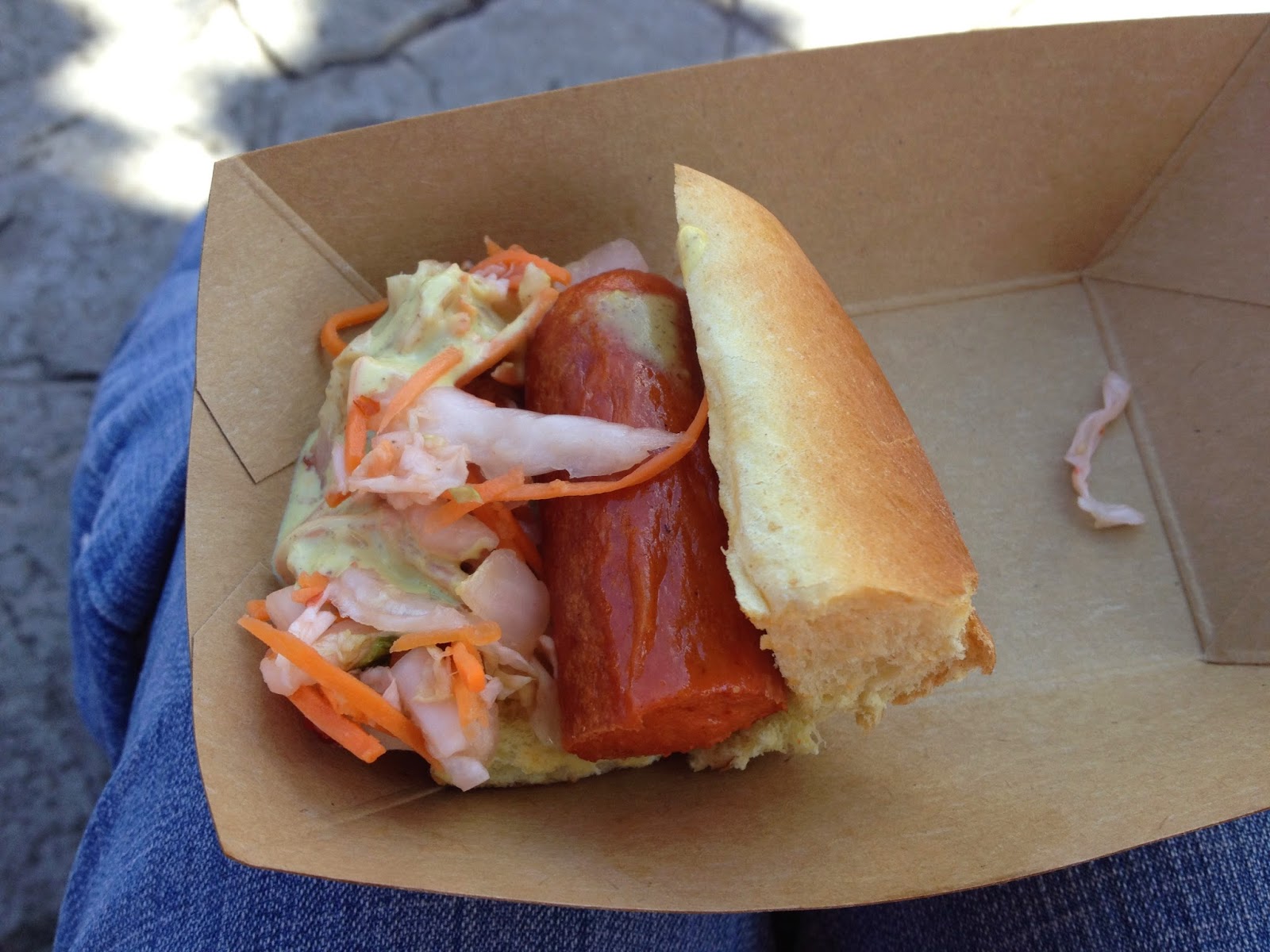 So, basically, I got a slaw dog.

At that point, I could eat no more. We tried to go on our usual rides: Maelstrom and Gran Fiesta Tour Starring the Three Caballeros. Unfortunately, Maelstrom is closed! They're going to put in a Frozen ride instead. Now, I liked that movie as much as the next person, but do we have to have a ride? And why does it have to take the place of Maelstrom? Phhlllbt.

So, we went on Gran Fiesta Tour and then went home...stuffed and happy, with very tired feet.

Here is what I didn't get to eat:
Garlic shrimp in Austrailia. It was at the end and I just couldn't fit another thing in.
Beijing roasted duck in a steamed bun with hoisin sauce in China. I like duck. But I was stuffed.
The escargot in France. We passed it early on, but I knew I'd never fit everything in and since I have the snails every year, I passed.
Sweet corn cheesecake in Mexico. It's a shame I had to miss that!
And venison with pickled mushrooms, baby arugula, and black currant reduction in New Zealand. Just not enough room in the body...


*Just kidding about the moose.