Every year, Publix supermarkets have tiny little food festivals in their stores before Thanksgiving. This year, hubs and I (as you know from my blog, devotees of the annual Epcot Food & Wine Festival) attempted to make a lunch out of it.

First, we went to our neighborhood Publix where we do our regular shopping.

We always head to the right when we go to Publix and this store is, I'm happy to say, laid out properly. First stop, the deli and a mini Thanksgiving dinner of pulled turkey in gravy, stuffing, and mashed potatoes. 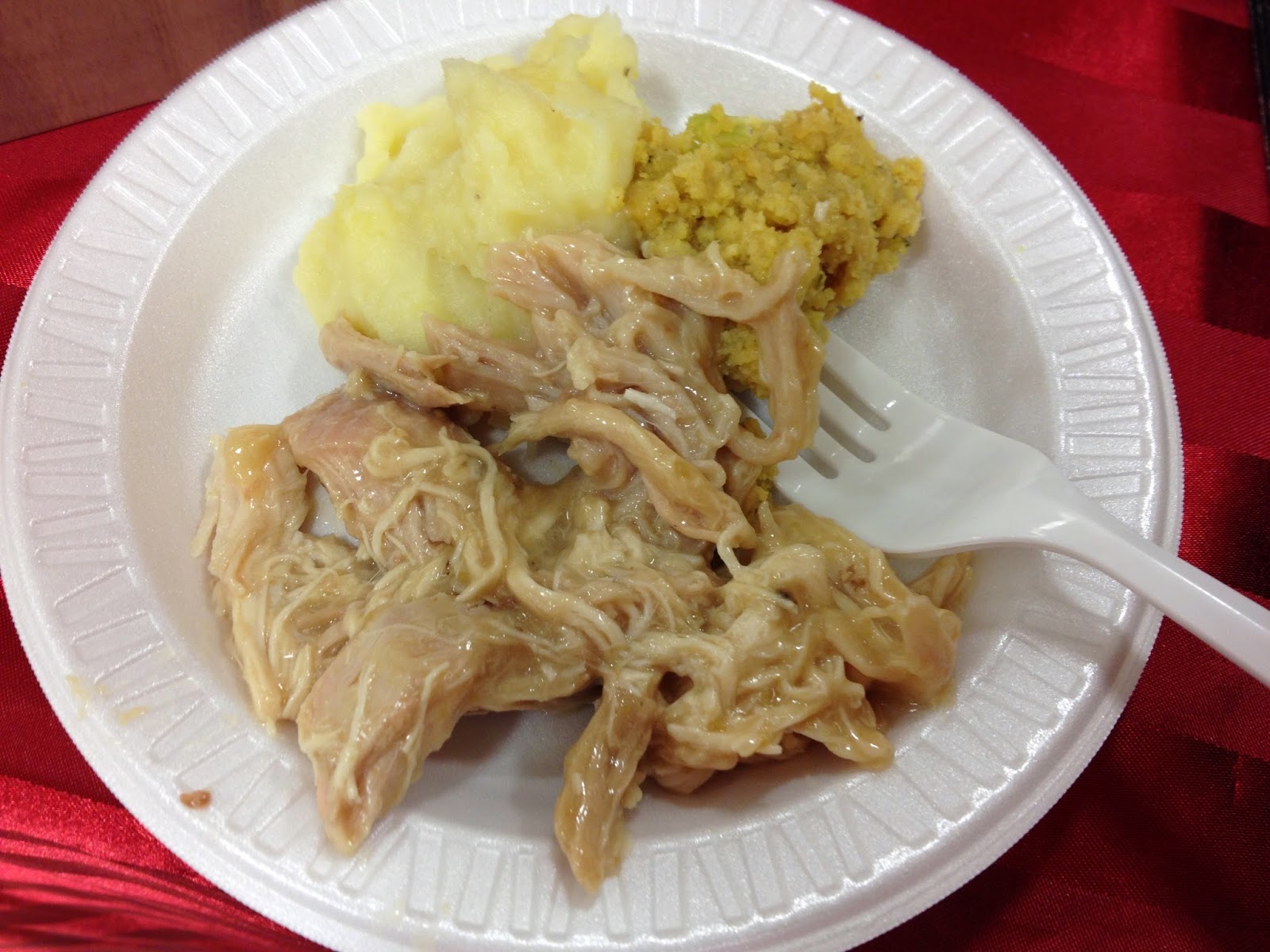 The turkey was delicious, even though I prefer a nice slab of dry meat. The look of this was unappealing, but probably cheaper to make and sell. The stuffing could not compare to my own homemade cornbread stuffing. Flavorless, I'm afraid. The mashed potatoes were okay. Tasted like they were made with real butter. I'm not a fan. But hubs declared them NOT Boston Market-y. (That's an inside joke that you'd have to go all the way back to our first Epcot FWF blog to understand.)

Next up was the bakery where they were handing out tiny slices of raspberry cake. Hubs abstained. I thought it was scrumptious! I would totally eat a thick slice of that. But the cake retails at $23.99! Are you kidding me? It will be on sale for Thanksgiving at $19.99. I don't think so.


Then we got some melt-y pumpkin flavored Publix brand ice cream. It had some sweet crunchy bits in it that hubs declared to be crust. Bits o' crust. Could be... 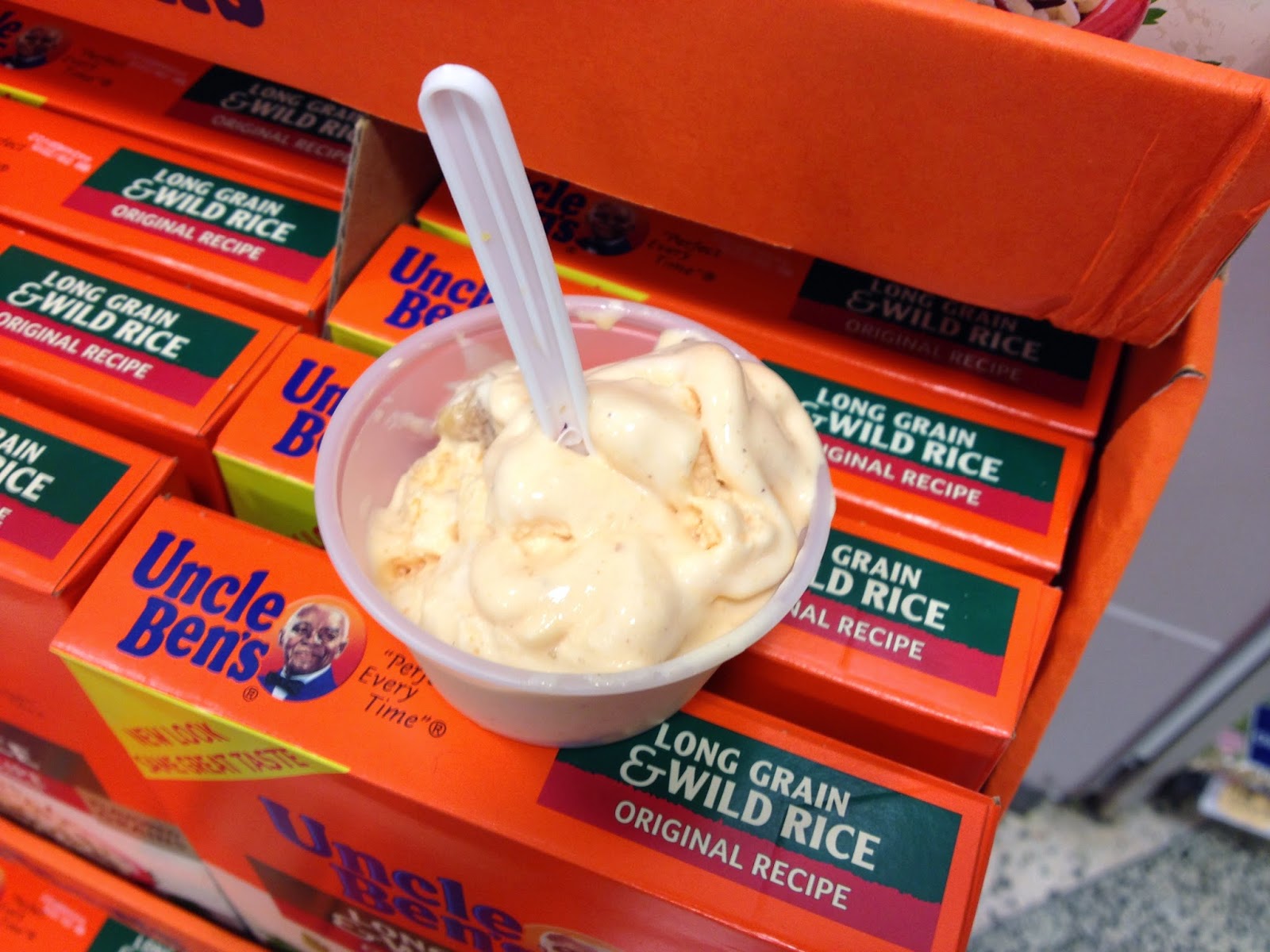 So, a little meal and two desserts so far. Not bad. I was on a bit of a sugar high when we came up to the meat department and got some real chunks of meat. 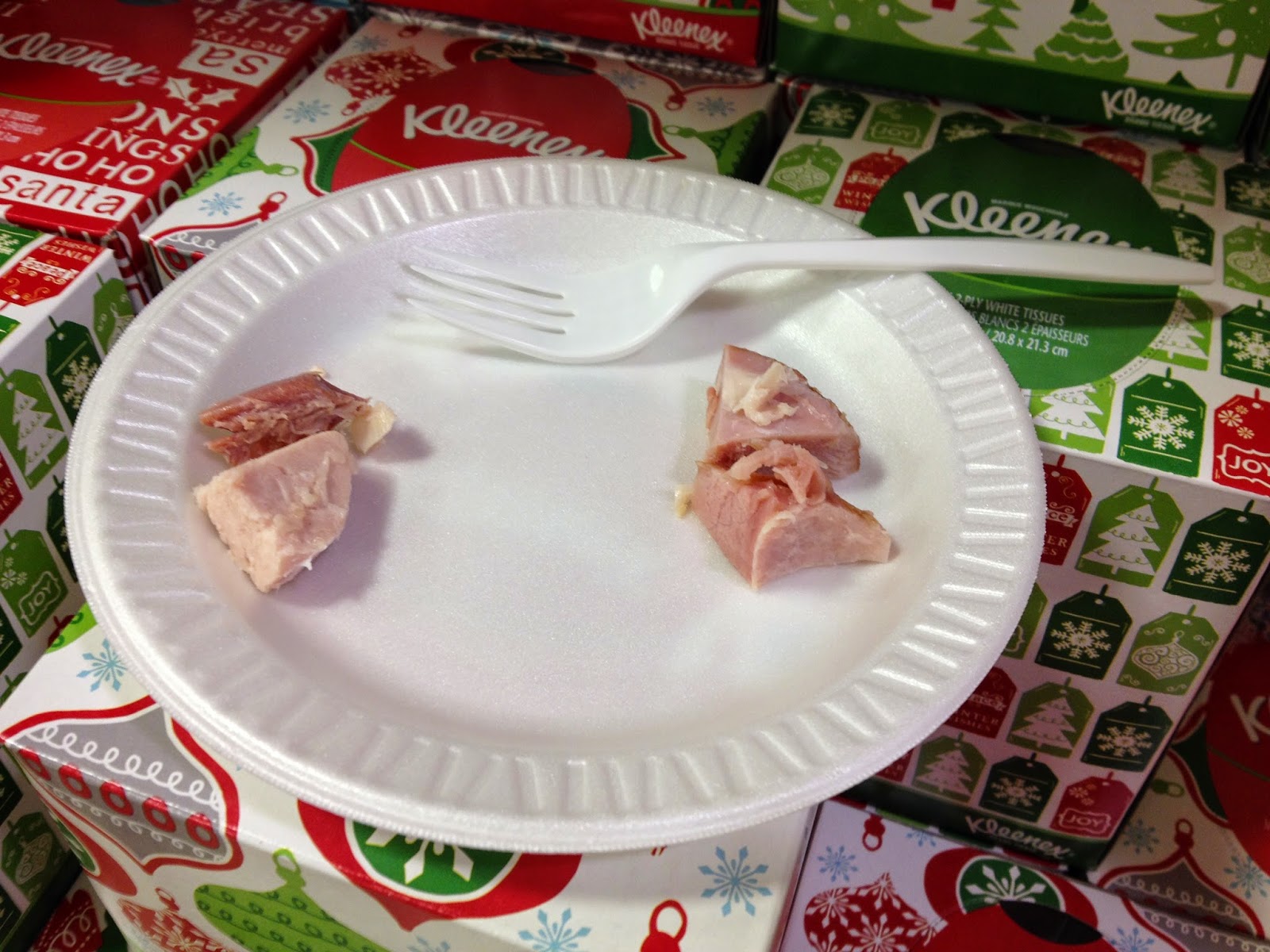 That's turkey on the left and ham on the right. Both smoked and very tasty. Then it was time to cleanse our palates with a hunk of pineapple in the produce section. 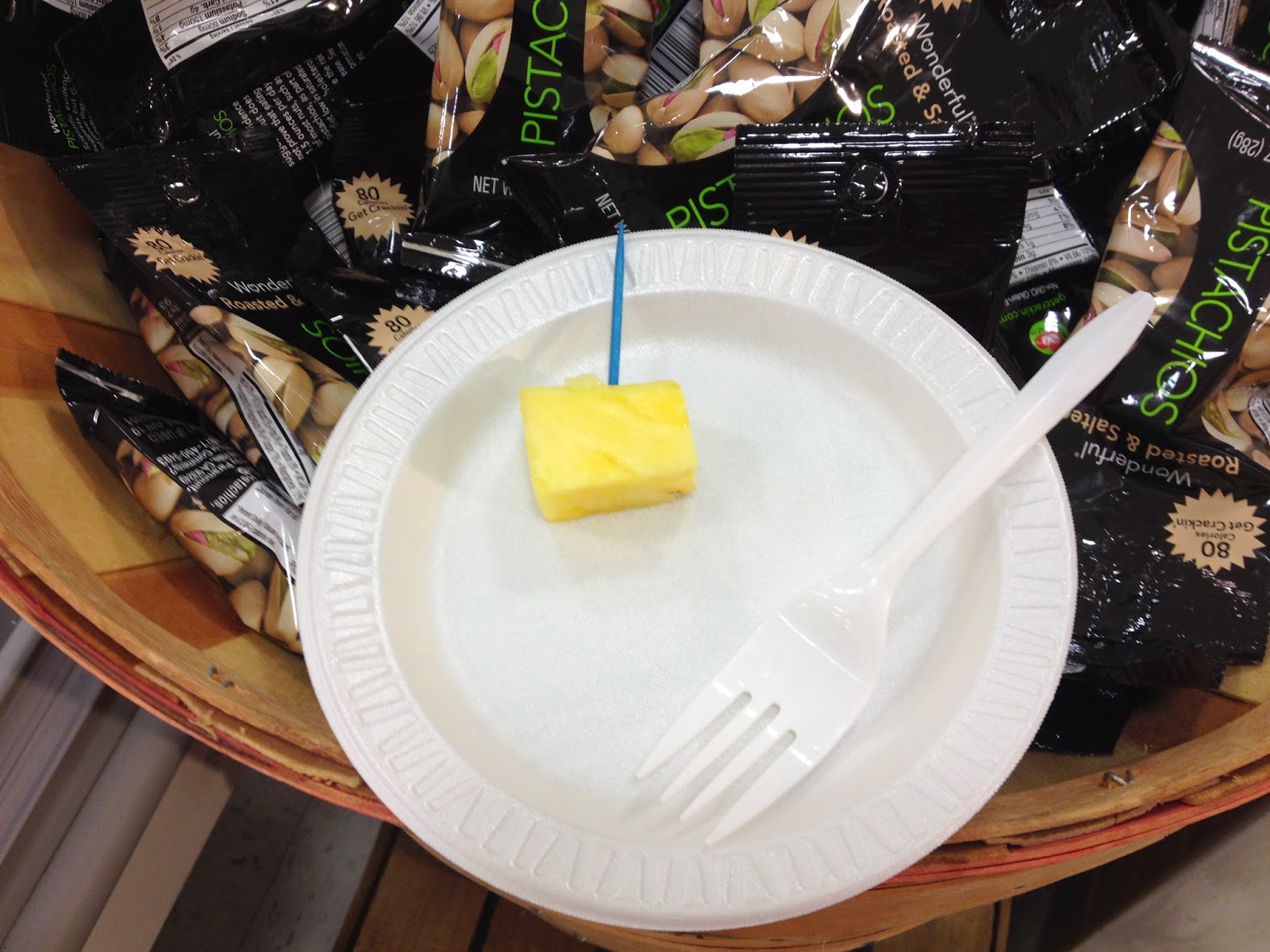 Yum. As we headed over to frozen foods, where I was expecting to be treated to a sampling of Baileys Irish Cream, we were disappointed to find that it was over. That was it.

So, we headed down the road to the other Publix and did it all over again. With a few differences, one of them rather strange.

Heading to the right again, this Publix offered us dessert first with an even tinier slice of that raspberry cake. I'd be stingy with it too at $23.99 each. 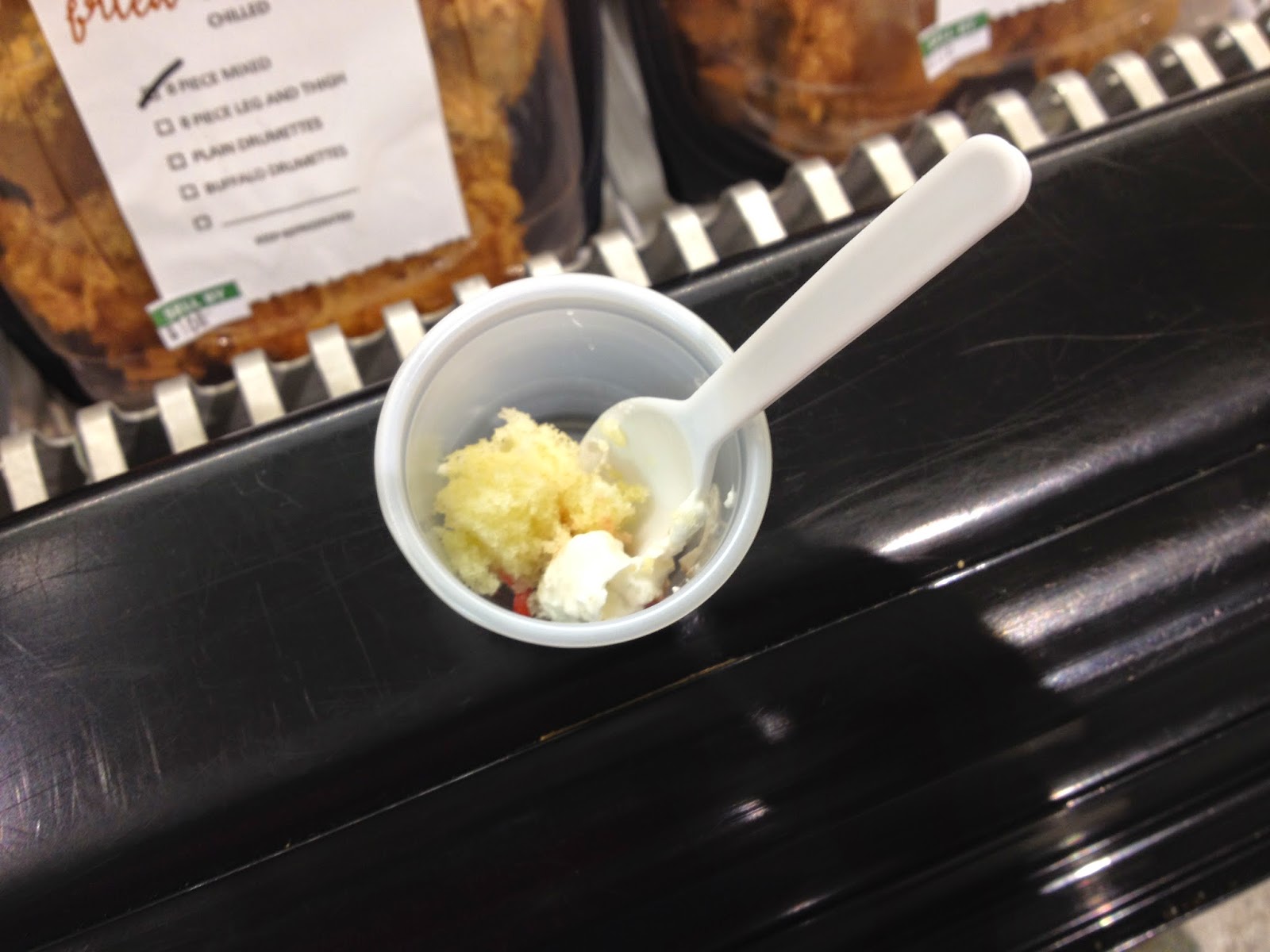 Then over to another counter where we got some eggnog. 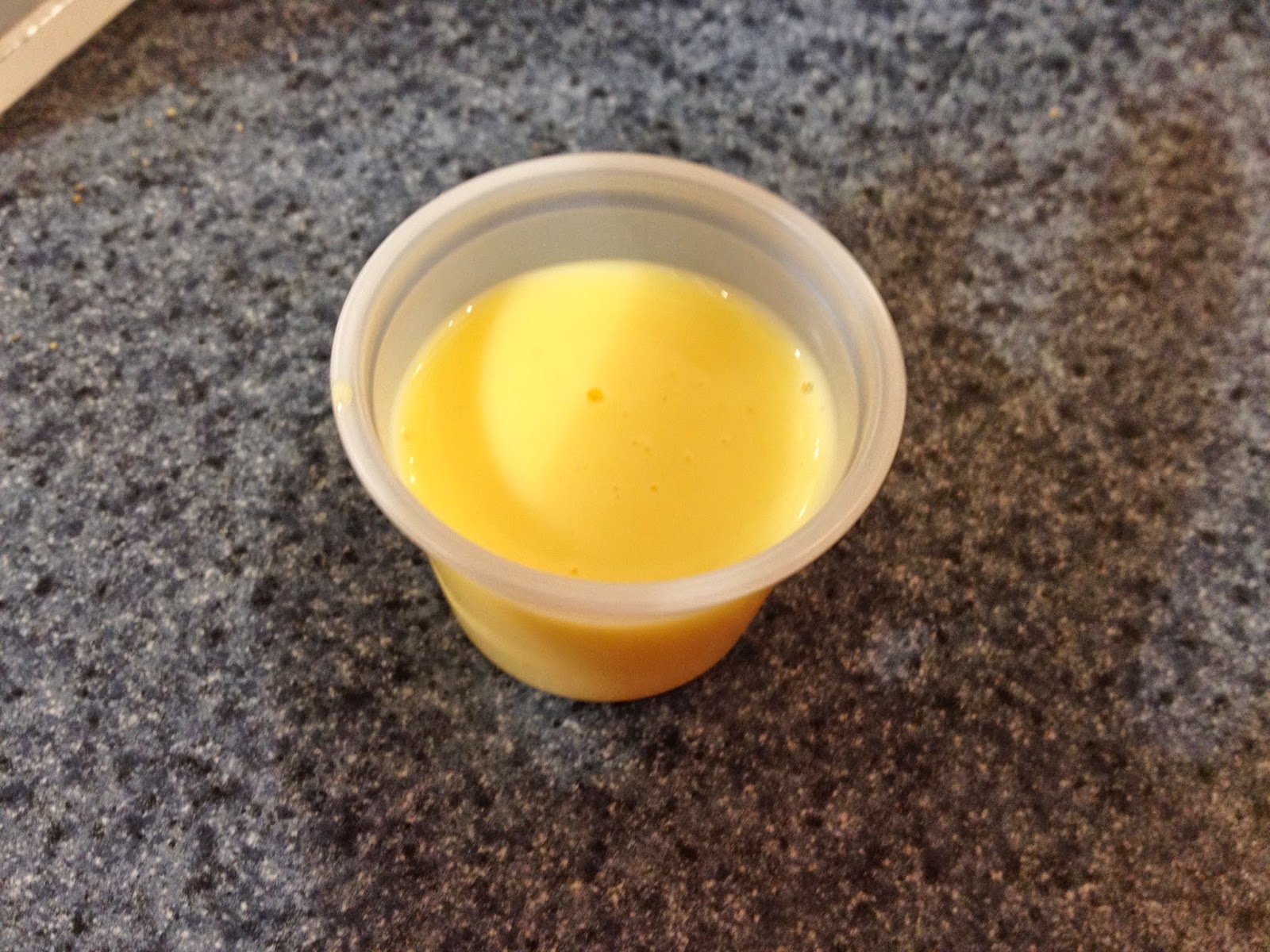 And a quiche that the lady said was bread pudding with pears in it. I didn't taste any pears. It was definitely quiche. And a small slab of steak. Perhaps this is breakfast? But the eggnog...? I don't get it. 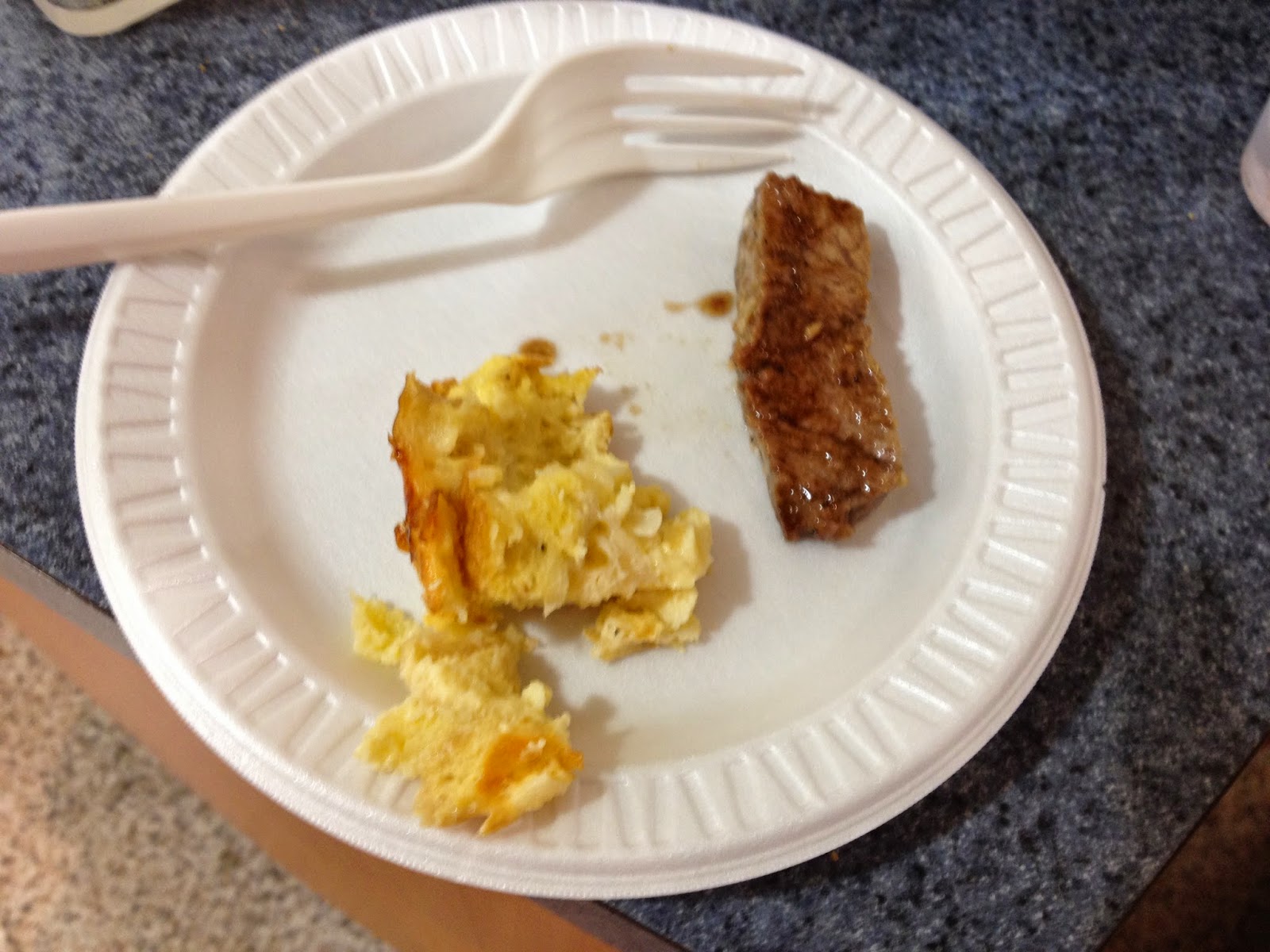 Then over to the deli and another mini Thanksgiving meal. This time we got to choose dark or white pulled turkey, mash or stuffing. And we got cranberry sauce. Very tart cranberry sauce. The stuffing here was better than at the other store. Hubs said it was because this one had salt on it. 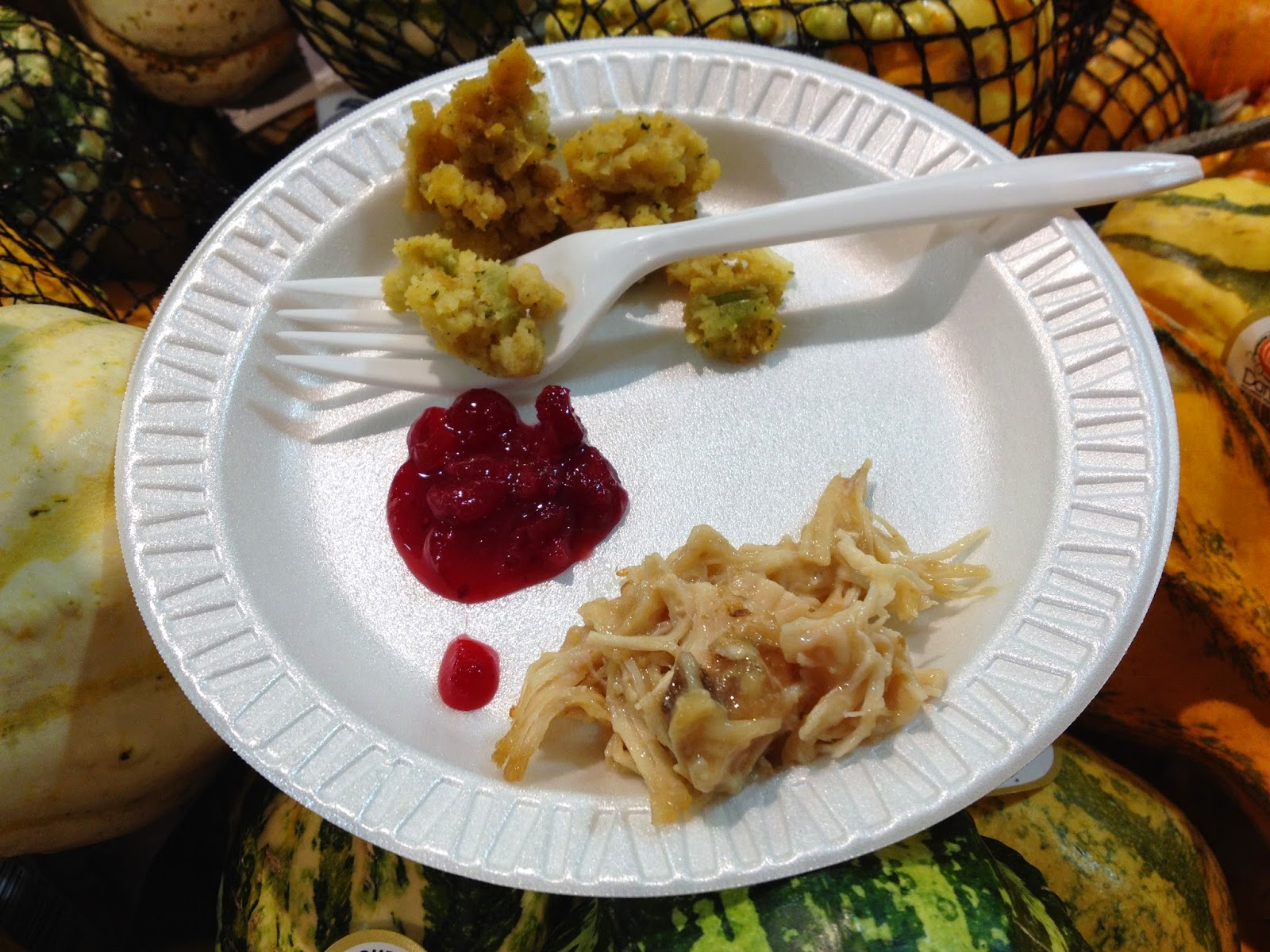 And next, in the produce section, we were once again treated to a hunk of pineapple. I had no idea pineapple was a Thanksgiving staple, but what do I know? I'm from Florida. 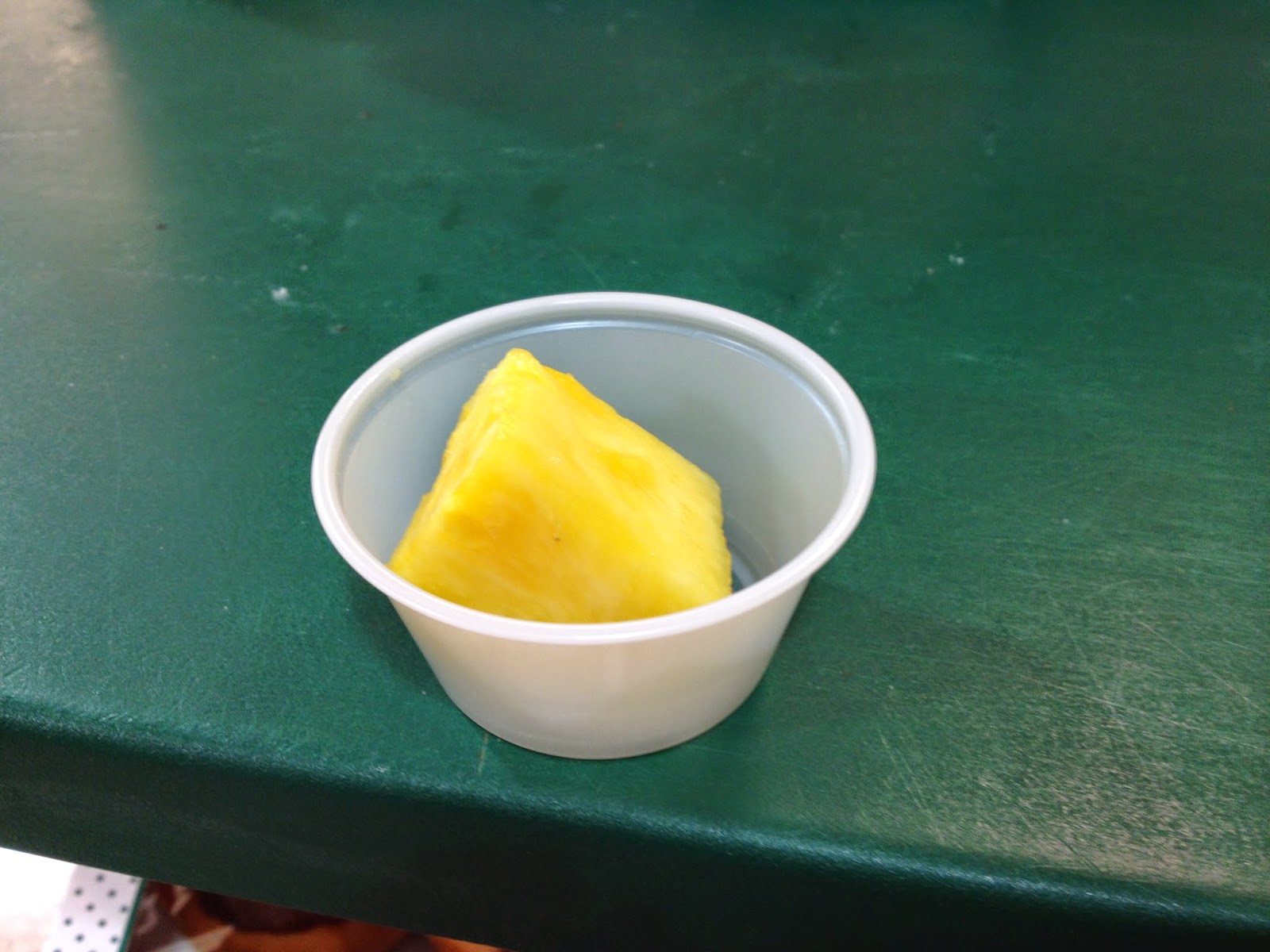 We weren't given a toothpick with this one so we had to eat it with our fingers. Next we got the strangest thing. In the meat department. Sushi. Thanksgiving sushi! I chose the shrimp variety and it was very spicy. Had to eat with my fingers again, but maybe that's how you eat sushi. 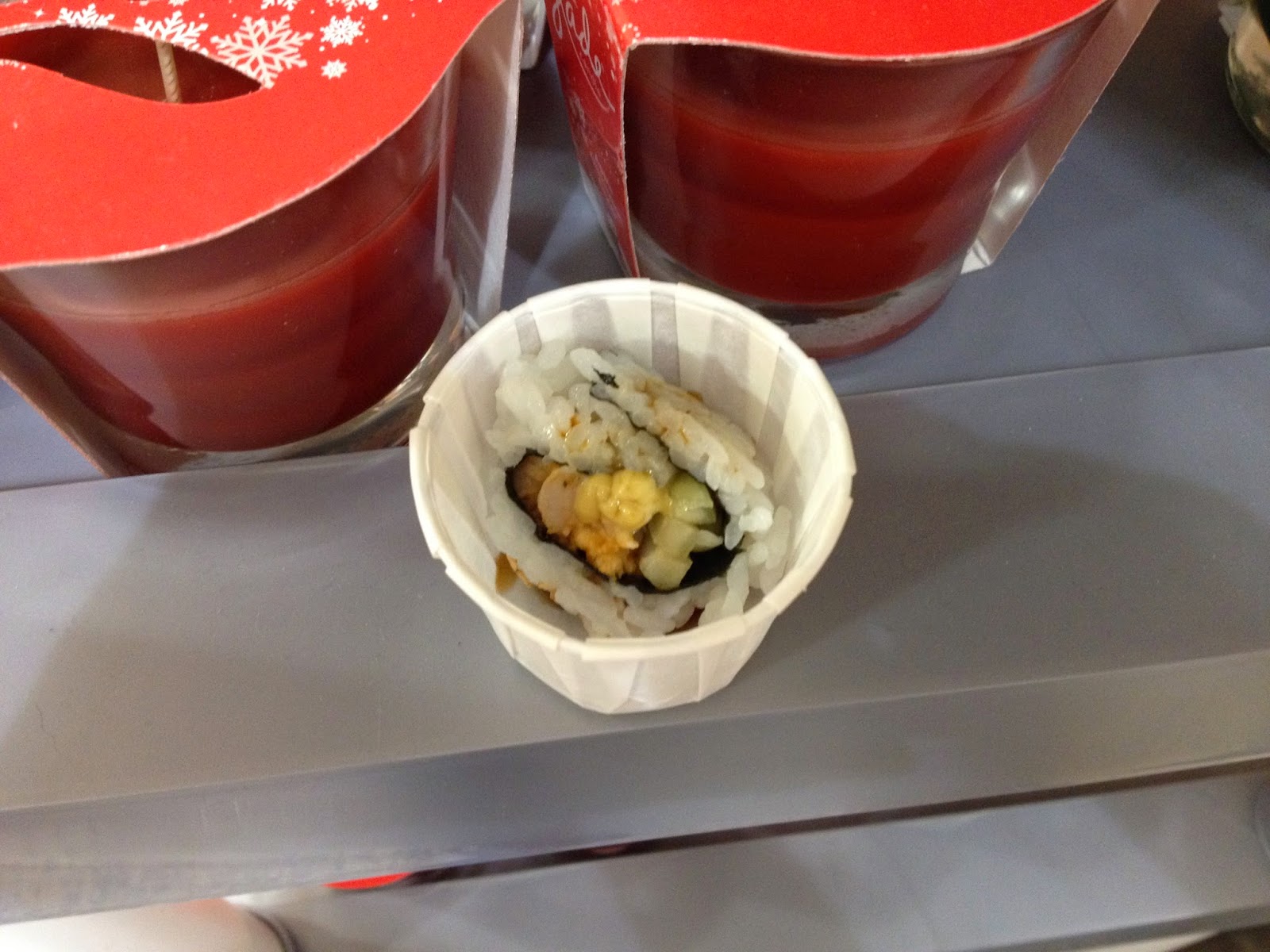 Then on to frozen foods where we had a choice between pumpkin pie ice cream and some other kind that looked like chocolate but the guy said it was coffee, so we got pumpkin again. This time it wasn't melt-y and I thought it tasted much better. But we're pretty sure it was because I ate it after eating spicy sushi instead of raspberry cake. 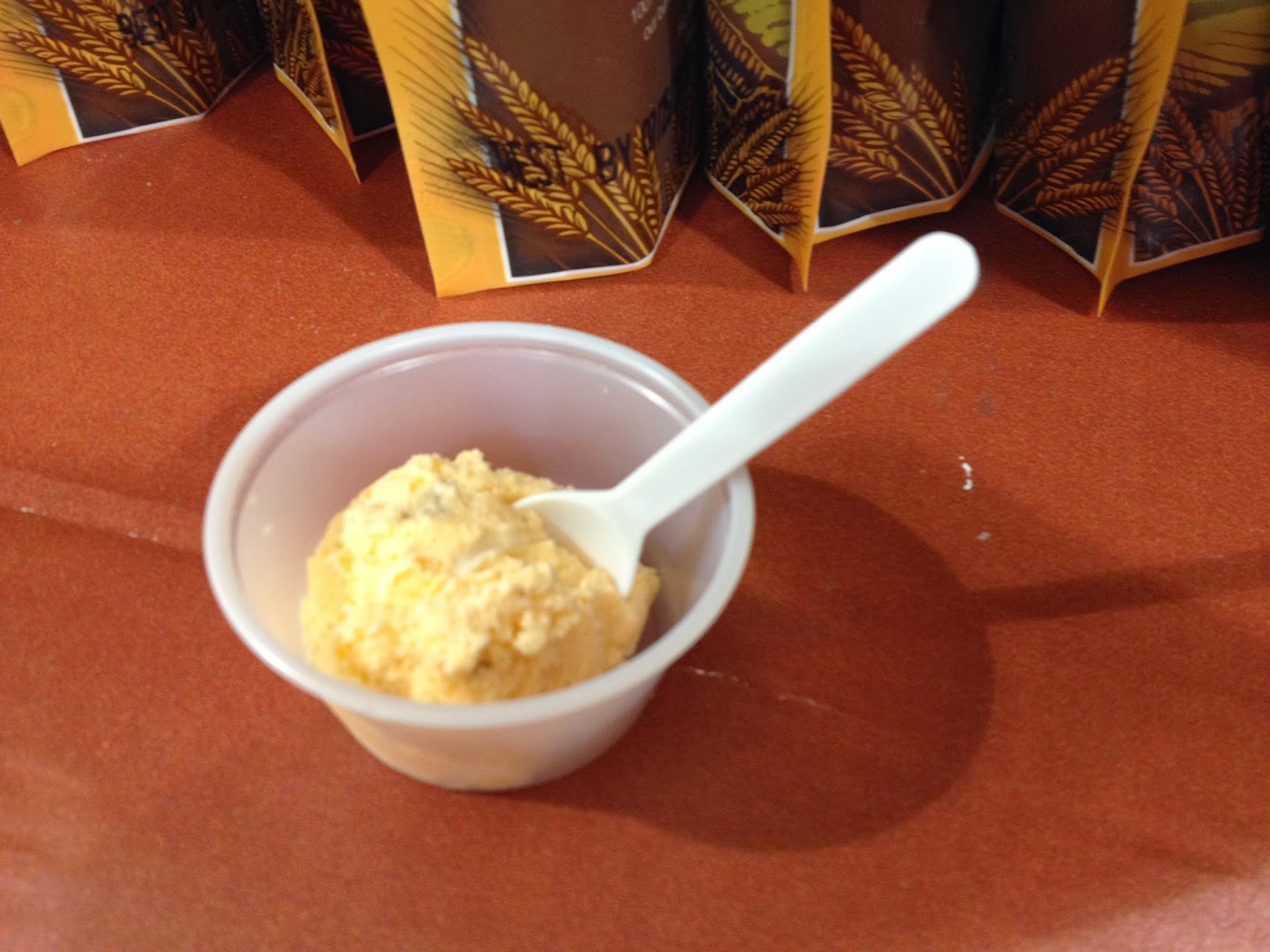 Still no Baileys. I swear I got Baileys one year. Maybe they'll do it again at Christmas and then I can get the Baileys. I suppose I could just buy some Baileys. But the way I chug drinks, I'm thinking...I'd better not.

All in all, a pretty okay lunch, if not a bit sugar heavy.

Publix, where shopping, and tasting, is a pleasure!


Posted by Dianna Dann Narciso at 2:22 PM No comments: 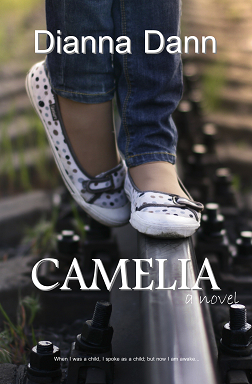 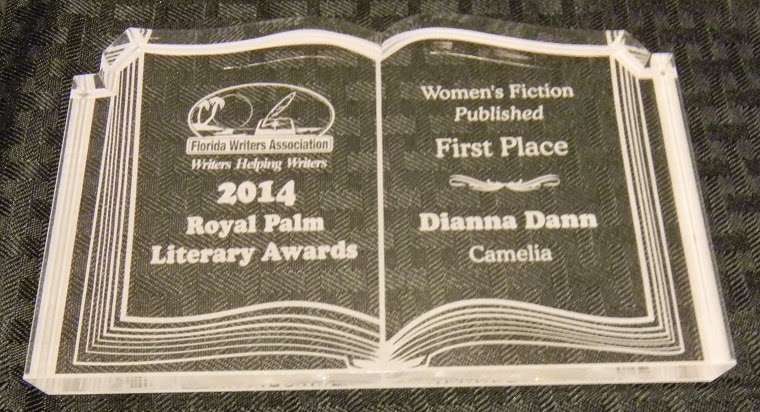 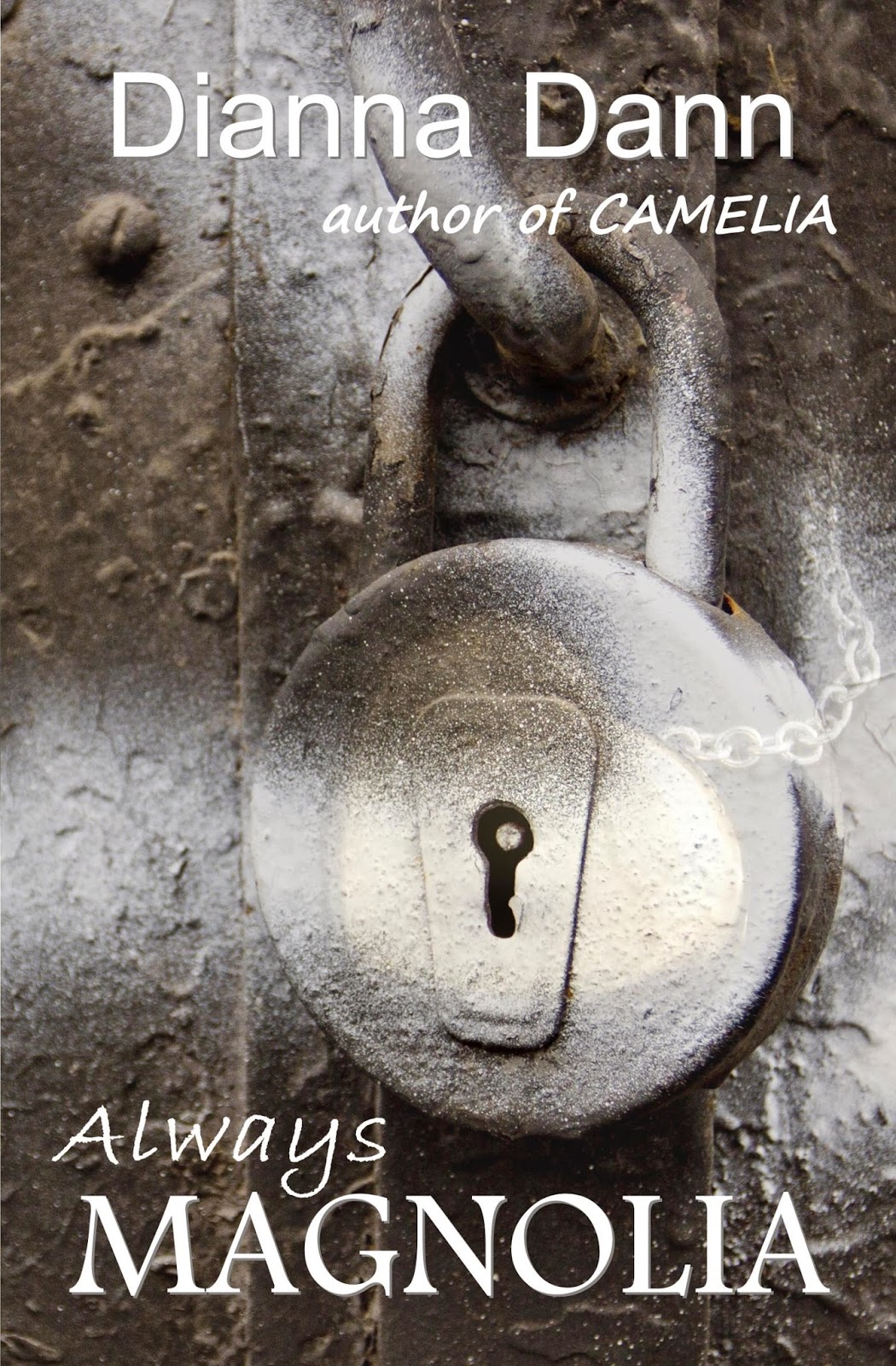 Posted by Dianna Dann Narciso at 5:30 PM No comments: