Book signings...what am I doing here?


Sometimes--okay daily--I can't figure myself out. I'm a set of contradictions. Is everybody this way? Probably. But I'm the only one in my head so I've got it the worst.

I'm introverted, but I want to get out into the world.
I'm shy, but I talk a lot to strangers.
I'm logical, and way too emotional.
I'm rational, and believe some of the stupidest things.
I'm rather intelligent, but don't ask me any questions (especially related to history...in which I have a BA degree).

Get this. I signed up for a book-signing gig a while back. $250 for a table. I was told this was a fabulous event! A must-attend event! This guy who told me about it said it was the best thing ever.

But, come to find out, it's not a book-signing gig. It's...like, a party. It's billed as an event for readers and book lovers. Readers pay...? to meet authors...? There are parties, and panel discussions, and more parties, and schmooze parties, and parties. Did I mention that there are parties? And stuck in there, somewhere, on one of the days (my god, it's like three days of parties) is a two-hour book signing.

I don't do parties. People. I barely do the booksignings where I get to sit/stand at a table and try not to bother people who are looking at my books (as opposed to those outgoing authors who TALK to them. I'm always like, jeez, leave the peeps alone and let them browse. But apparently, yakking at people works, somehow. I think I know how. Some very important businessman said something about how you don't sell products to people--you sell stories. Stories sell the products. My story goes like this, "This wallflower walks into a party and stands there...").

OMG, all of that was a parenthetical.

Anyway. I had to contact the organizers of this popularpeople/extrovert love fest and beg them to give me my money back. I said to the lady, "This just isn't for me." And  she said, "You're right. If you don't like making connections and being nice to people, it's not for you." Okay, she didn't say that. But I got the message, anyway. If you don't want to socialize, stay home.

It's not so much that I don't want to socialize as it is that socializing is awkward and draining.

I attended a one-day book-signing event on Saturday in Cocoa Beach. By mid-day I felt like crying. I wanted to go home. I can't explain that adequately to an extrovert--and the room was filled with them. Being out of the house is one thing. But then being in a room filled with people all day, all day, ALL DAY, is nearly unbearable. Going to the bathroom would be a respite except that there were always other people in there.

Anyway, the point being that I came home from that book signing wondering if I should be doing these things at all. I know I've given you the idea that I'm one of the weirdos, but I'm not. I'm not the creepy dude with hairs in his nose trying to sell you his erotica. I'm not the squeaky-voiced woman wearing clothes that don't match, with an owl on her head, screaming at you to come to her table and buy her book on an elevator serial killer. (No, don't be ridiculous, he kills people in elevators.) And I'm not the super religious couple peddling their apocalypse.

Seriously, I'm normal. That normal looking, well-dressed (If I do say so myself) woman with all those fabulous books. Too many, really. You wonder if she's got multiple personality disorder with all those pen names. You can't pin her down and that's probably why it's so hard for her to tell you a story about her book, so she just smiles and let's you look at them all...in their printed glory.

So....I am booked for OASIS. It's a scifi convention in Orlando put on by OASFiS. And, despite having just told you, and myself, that I probably ought not be doing these things, anymore (I didn't really believe myself, did you?) I am excited about it. But...I thought I ought to look it up and see what to expect.

Because if there's anything an introverted, OCD, control freak needs more than medication, it's knowing what to expect.

I didn't find much. But I did find this. Now...before you watch it, I should warn you...it's sad. It's so sad. But if you are an independent author, hell even a trad author, who's endured book signings, I think you'll laugh until you cry.

So, without further ado:

Or maybe not. I don't care. It looks rockin' to me. Maybe I'll make a video, too. And if I see James Allen Starkloff with his book InterTerrestrial, I'll be sure to give him a knowing look and a sigh.

Posted by Dianna Dann Narciso at 4:08 PM No comments:

The wrong yardstick for a woman's worth... 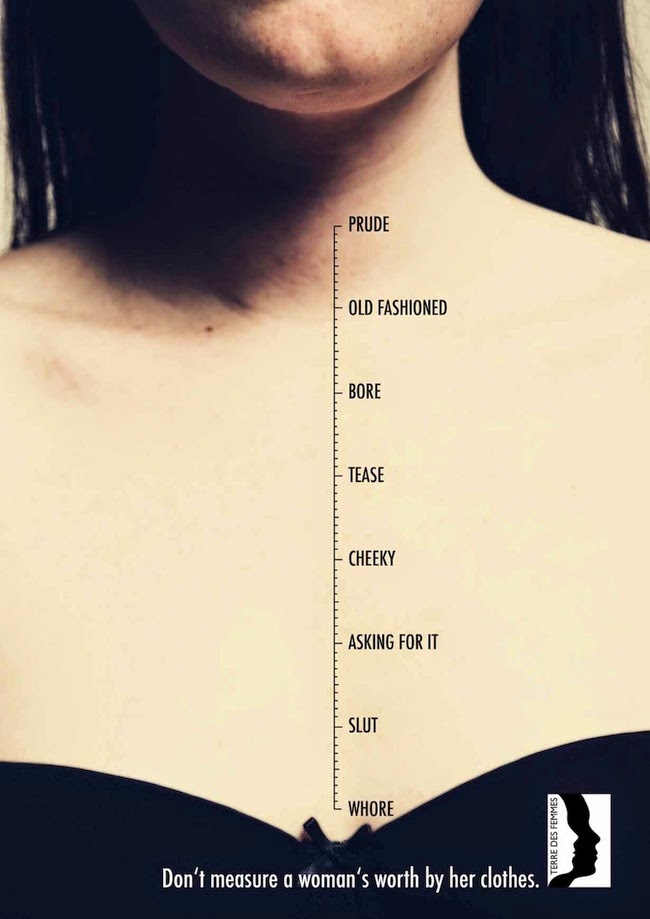 I'm on the Facebook when I see this article [new link about it here] about a campaign for gender equality by Swiss organization Terre Des Femmes. It's called: Don't measure a woman's worth by her clothes.

At first glance, you might think this is a great idea. I mean, really. Just because a woman wears her neckline really low doesn't make her a slut! Seriously. Dude. Even sluts sometimes where 'em up to the neck. And it's not just the sluts and whores who like really high heels. Good girls wear them, too. Am I right?

Their tape measure is wrong. All wrong. A woman's worth has nothing to do with those standards, regardless of the clothes she wears. This campaign does nothing to combat the idea that women who like sex are sluts and women who don't are prudes. It escalates it, by telling us that prude, tease, slut, and whore are on the "woman" measuring tape!

Do they not see that? Any young girl looking at these pictures is well aware that they are being judged as women, as humans, by how sexual they are. They can wear their hemlines as high as they like, knowing full well they may be judged by it...not on how smart they are, how kind they are, or how giving, but by how much sex they're likely to be having.

Units of worth for women are not related to sex. Words like smart, talented, and kind would do. And for this stupid campaign, on the low end, they could have used words like brainless and trashy.

If they wanted to say that women showing their bodies to the world has nothing to do with their value as humans, they missed the mark. Instead, they've just shown us that they think of women in terms of how sexual they are. And that's okay with them, so long as we don't use their clothing as the yardstick.


Posted by Dianna Dann Narciso at 4:41 PM No comments:

The Year of the Office: Two new books and a ghostly encounter

Okay, let me get the books out of the way and then I'll tell you about the ghost!

I finally completed The Story Runner, the title of which has been changed to Story Runners: Awakening. It's the first in a new fantasy series about story runners who can travel between the shattered fragments of their world to fight to free their people from the evil heirs of Shadyn. 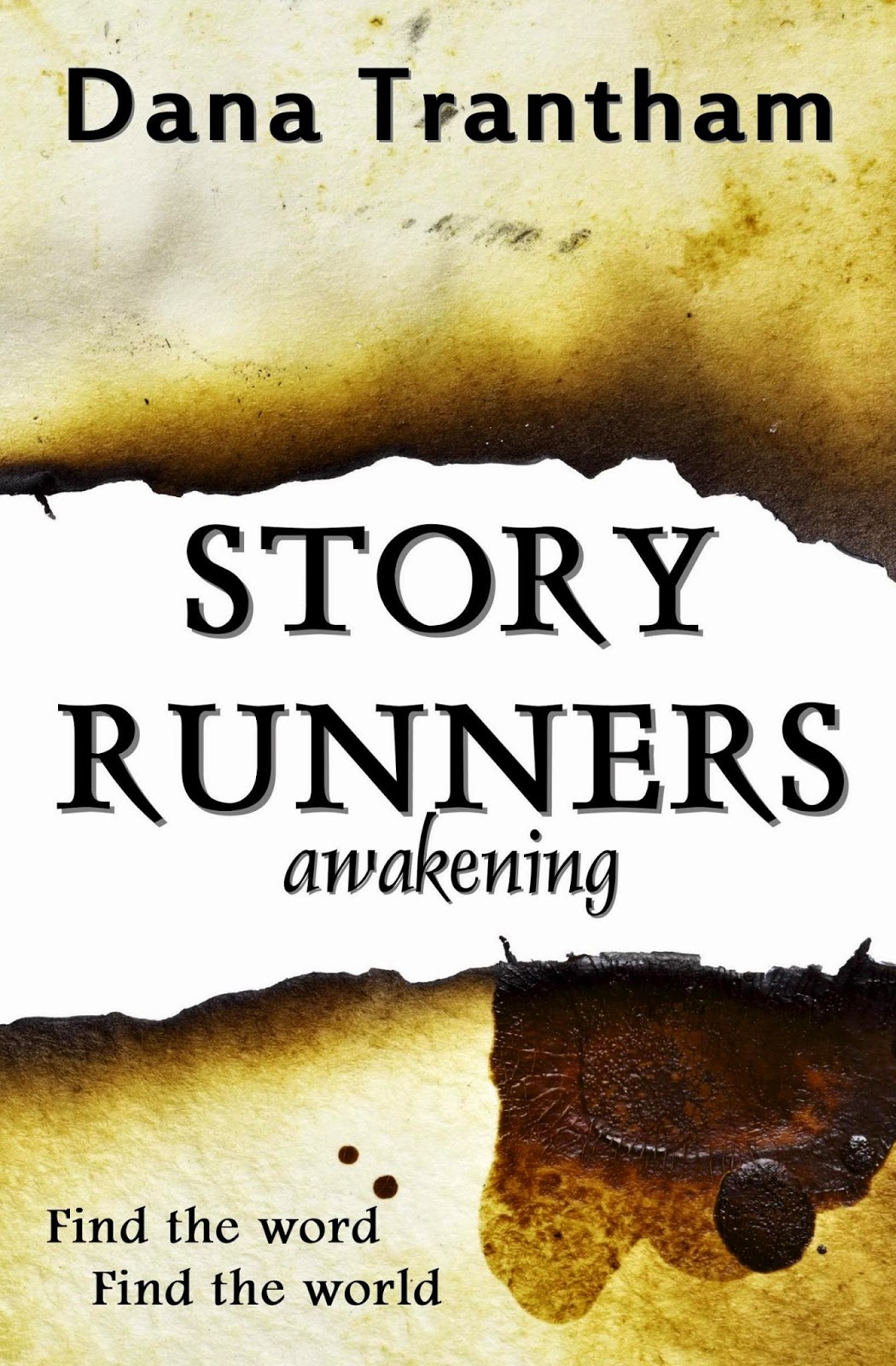 And I also finished up Zombie Cats! I had the idea for Zombie Cats years ago and it was left partially finished for the longest time until I made a list of books to write. Sometimes you need a list to get things done. And now, here it is: 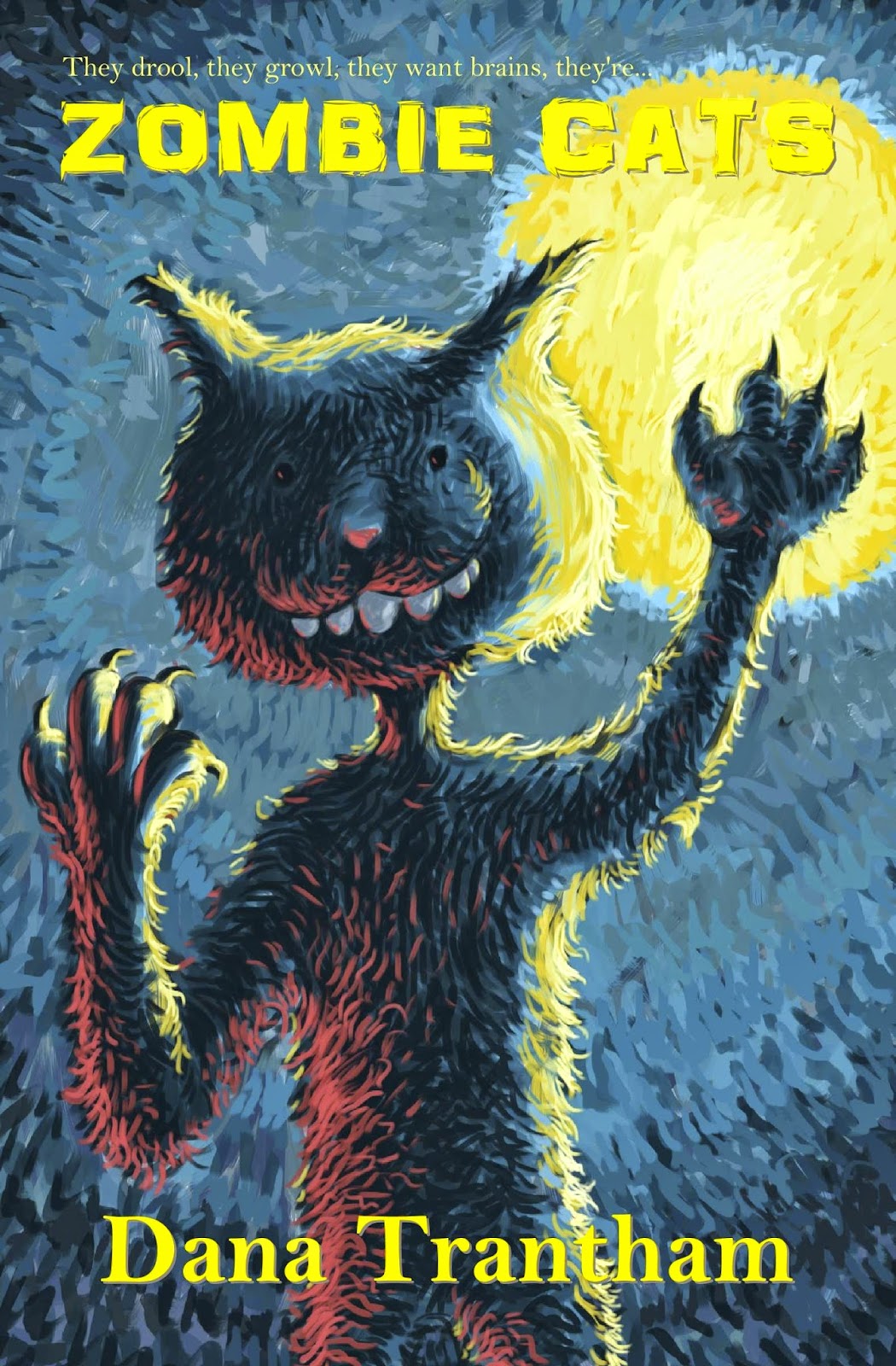 Zombie Cats is the story of Alfie Whitaker, who wants nothing more than to spend a couple of weeks this summer at his Gram's condo on the beach. But all the cats in his neighborhood are turning into ZOMBIES! If he and his friends can't come up with a cure, they'll be quarantined and the men in HazMat suits will ruin the whole summer! Egad. (The word "egad" is not found anywhere in the book, I assure you.)

Both books are now available at Amazon.com in print and on Kindle. Later on sometime, the ebooks will venture farther out into the world.

So, next up is the third and final book in The Kell Stone Prophecy series. I don't have a title for it, yet, which is odd for me. Then there's the third Dianna Dann book: Bury Me; D.D. Charles' JoJo's Ghost. A new Wayward Cat book, the second in the Story Runners series, Wilderforce: Gathering; and the first in a series of romantic comedies. Lots of work. I really don't have time for ghosts...

I did have a ghostly encounter the other day! (For info on the ghost in this building, read The ghost will see you now...) It was scary. I was heading out and I walked down the long hallway on the third floor to the closet where we can deposit our trash. I heard footsteps behind me but when I glanced back, no one was there! I kept telling myself it was my big bag, flopping against my back as I walked.

I carry a lot of baggage. There's this man I see often going in, or coming out of, the building and he always comments on my bags. I carry three: my purse, of course; my lunch bag, which is one of those bags you're supposed to put your groceries in to cut down on the number of plastic bags; and my giant book bag.


So, I'm the bag lady. That reminds me! I have this step stool that I use to prop my feet up on when I sit in my pink chair to edit manuscripts. But it kept sliding on the rug. So, I got a little rubber mat for it in the automotive section at Walmart. Just look at it! 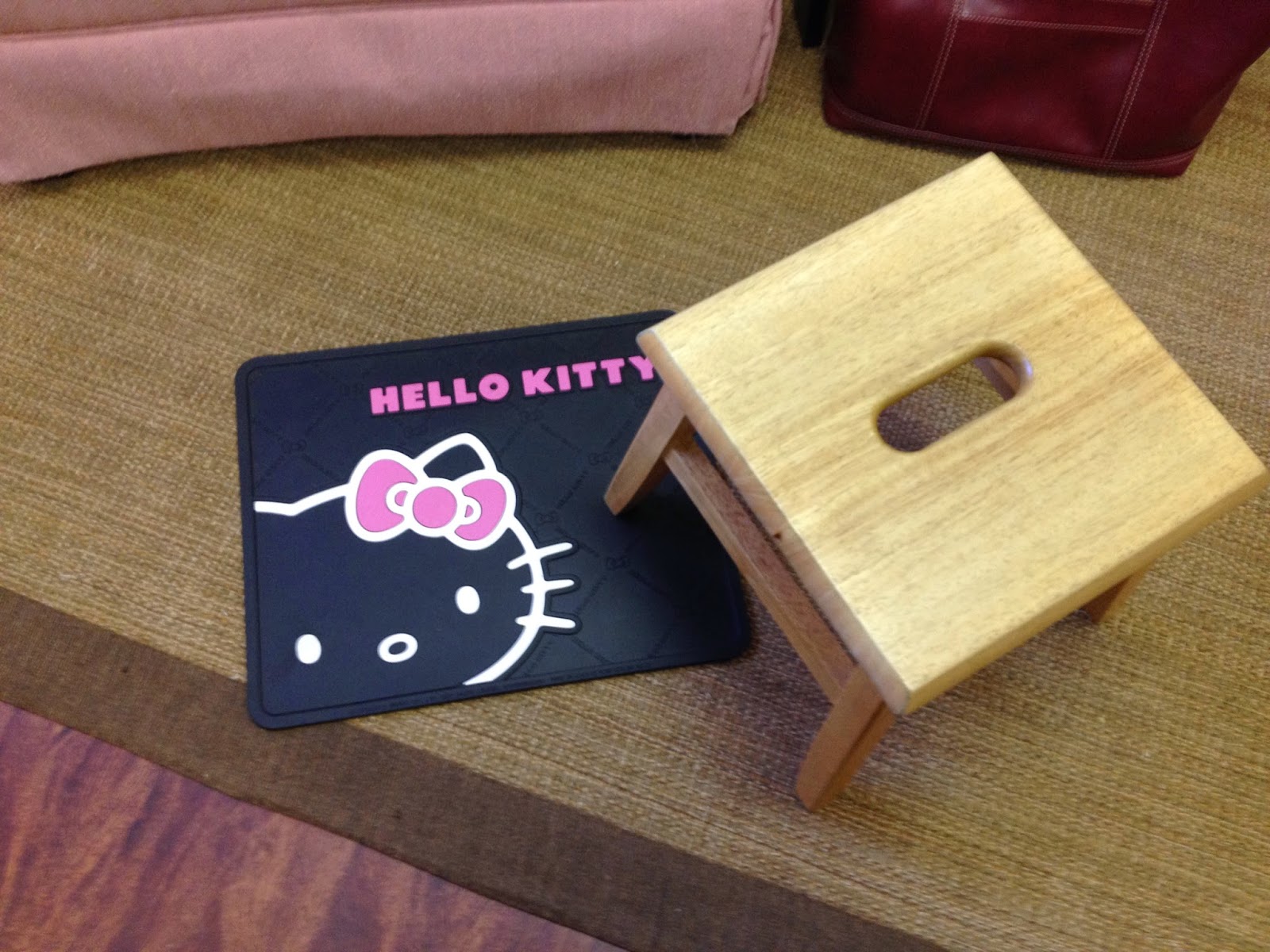 Anyway, the ghost. So, I head back to the lobby and toward the stairs and I hear it again! Louder! More certain! There are footsteps following me! And just at the door to the stairway, I turn back and...

There was a guy following me. I said, "Oh my friggin' god, I knew someone was following me," or something similar. He smiled and said, "I bet the stairs are faster than the elevator," and he followed me into the stairwell, where I said, "Unless you're behind someone going slow...like me." After which I tried to go quickly down the stairs so as not to hold him up.

That's my ghost story. I hope you aren't too disappointed. I'll try to be more...welcoming. We'll see what happens.

Here's one last picture. I went shopping in historic downtown last week--research for the romantic comedies. Seriously. Research. You should see the adorable tunic dress/top I got at Tallulah9! Anyway, I also stopped by that smelly shop, the one where there's always incense burning: Creative Energy. As allergic as I am to such aromas, I can't explain why I go in there whenever I'm downtown. There are just some things that are worth the puffy eyes and headache, I guess.

And I got this regal Egyptian treasure to add to my office decor: 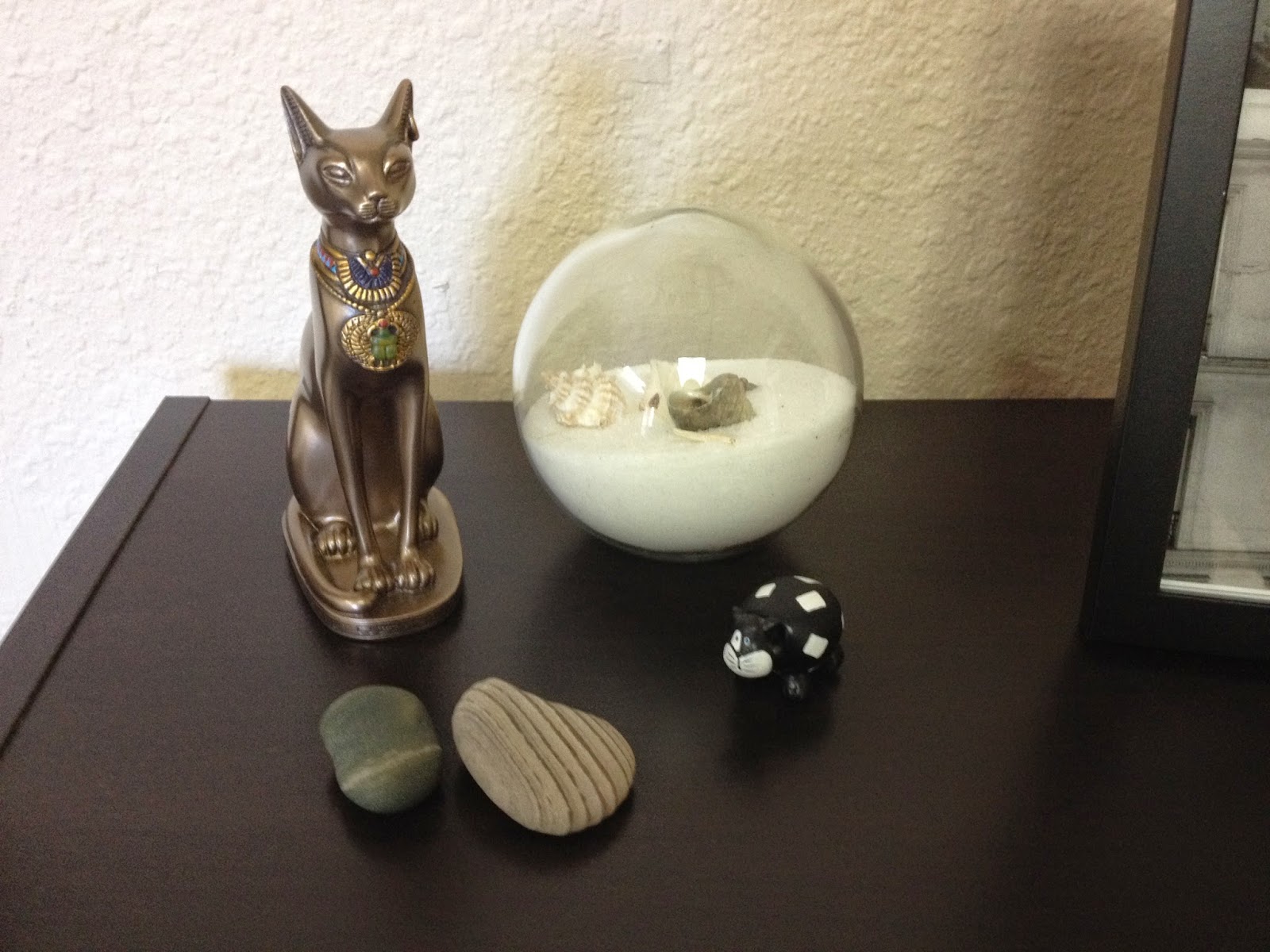 Little Bugsy looks like he's a bit worried. He shouldn't be. The Egyptian's head doesn't bobble, so he'll always be number two. ;)


Posted by Dianna Dann Narciso at 3:06 PM No comments: