A weekend at OASIS: Nerds convene!


I had a great weekend at the OASIS convention in Orlando. If you recall my previous post on book signings, What am I doing here?, you'll know that I approach these events with a bit of trepidation...fear?...already wanting to go back home before I arrive. But I really enjoyed this event.

The vendor room was lively and populated with interesting people and their wares. As author Glenda Finkelstein told me, for her, OASIS is like a reunion. And it seemed that way. Most everyone knew each other. Hubs and I probably stood out a bit--sticks in the mud--content to watch most of the time, rather than engage. But you do what you're comfortable with, for the most part.

The convention seemed geared toward sci/fi fans as well as writers. I sat in on a couple of workshops. I tried to attend Julie Czerneda's workshop on world building, but bless her heart, the first thing she did was ask us to find a partner and inform us she would be lecturing for only about six minutes in the entire two hours. I stood, turned, and fled. I can laugh about it now.

At the Myriad Fae Creations table, there was a woman named Kelly selling soaps in all sorts of sci/fi and gaming related shapes. You could fill a soap dish with little Darth Vaders and Han Solos in carbonite. I bought a Saving Throw Soap, about the size of a small orange. I'm not even a gamer! Kelly's a soap genius. 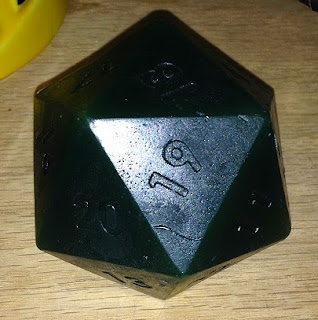 William "Bill" Hatfield was next to us, giving away homemade pineapple, white chocolate, walnut cookies and key lime tarts. Nom nom. He was also selling his books, and his wife's custom jewelry.

I learned about The Peninsula of Horror. It's a "channel dedicated to Florida Horror Hosts and Florida Horror Hosting." I'm like...what? I am such a noob. Check it out. You'll understand. Anyway, at their table was this guy dressed like the Creature from the Black Lagoon. He was in persona as Professor Gillman. He hosts the channel with Oliver, Doctor Xombie, and Master Vyle. Vyle gave me a copy of one of his books: Frog Nog and Other Horror Day Tales.

I bought a shiny at the Welton Rocks, Gems & Jewelry table. Donald does the rocks and Roni makes the jewelry. It's beautiful! She'll be at Space Coast Nerd Fest in Melbourne, May 23 & 24. 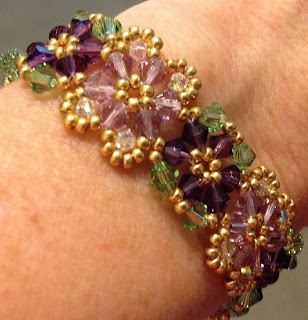 Ben Bova was there, signing books, along with the aforementioned Julie Czernada and Jack McDevitt. They had a gaming room in which people were...playing games, and a video room where they played movies all day.

And next door, on Saturday, was the Imperial Beauties of America pageant (It's a "scholarship" pageant...uh huh).

Book-selling-wise, it was a success. I'd totally do it again...just for the free key lime tart.

For some reason, though, nobody went for the $850 Yoda. 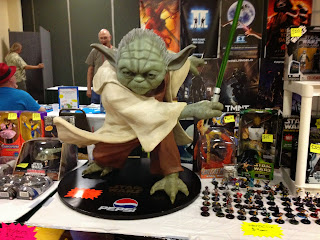 Posted by Dianna Dann Narciso at 9:32 AM