My first sewing project is finally finished. It's been ages since I sewed anything. So, I started with this super easy pattern. 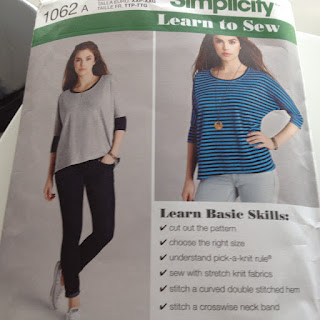 Unfortunately, I didn't bother to fit the pattern. Well, I did hold a piece up to my dress form and think, "That might work." But it didn't. I used the bust size on the pattern package and it said I should make the medium. This was my first try: 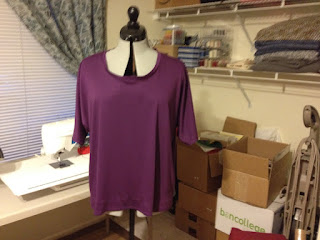 It was ginormous! I think medium in pattern world must be XXL. So, I smallened it. I took an inch off either side, and then went ahead and hemmed it. But it was still too big! I also didn't like the way the neckline didn't lie flat.

So, I smallened it some more, this time taking two inches off either side. I used one of my favorite shirts as a guide. Then, I laid the pattern piece on it, to see what size I should have made and incredibly, it's a tad smaller in the waist and hips than the XXS! That's just stupid.

I folded the neck facing under and sewed it down with some top stitching. 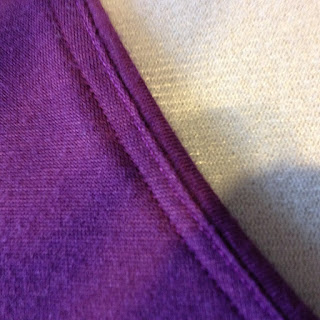 And, instead of redoing the hem, or fudging it to make it even, I just folded under the little flap that was left hanging, and sewed some top stitching all the way up. That was a wild ride. I actually sewed down the seam allowance through the armhole! All the way down the garment. I was really thinking I was a genius. I mean, I'd seen that sort of thing done on the sewing shows, but I hardly dared to think I could do it. But I did! 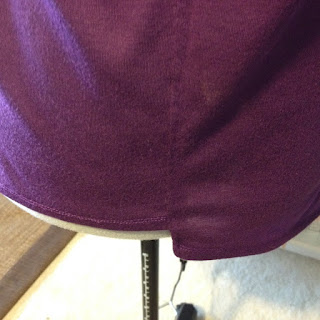 So, here it is in its finality...maybe. 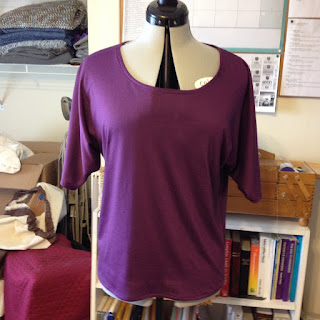 I say maybe because about two inches from the bottom edge, on the front, it looks like I burned it with the iron. You can't see it really, but I can. So, I might add two layers of ruffle, or some other embellishment. It's comfortable, so I might actually wear it!

Let's look at the before and after, side by side. 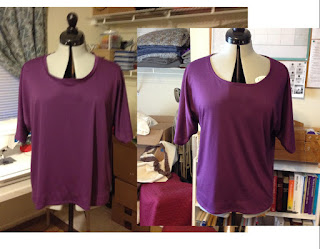 You can really see the difference in size. The neckline is much bigger than the pattern picture above, but that's no doubt because I started with medium instead of small, and then folded the facing under. If I ever use that pattern again, I'll start smaller.

The only things I remember making years ago were aprons for Christmas presents, and one very easy-to-sew top. And I remember using cotton. I know I must have used knit fabric at some point, but I don't remember it.

This knit was difficult to work with! For one thing, I never used to wash my fabric before using it, but I washed all of them this time (I bought enough for a lot of projects because I had to go all the way to Merritt Island to find a great fabric store). So, trying to refold this stuff and get it straight wasn't easy.

And sewing it was a bear. It curls on the edges. It slips and slides. But once I got into it, I managed pretty well. It's just a matter of practice. 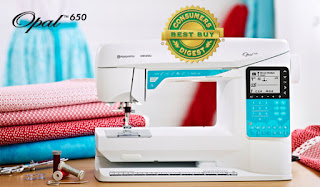 The only problem I had was that I was working on a card table and whenever I got going at a nice speed, the machine bounced all over the place. I've ordered a new table/desk and it should arrive any day now.

I went with this Samber computer desk from Sauder: 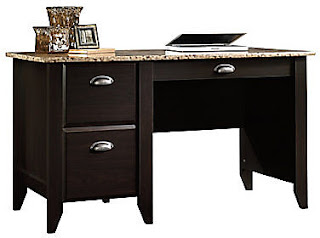 It's sturdy and heavy, and didn't cost a fortune like most sewing tables do. For some reason, I don't care much for the inset thing with sewing machines. (Maybe because those sorts of tables run about $400!)

And this one is longer than it looks--almost 60 inches.

For my next project, I'm making my own pattern! I know, I know. I don't understand working my way up. I'll take pictures and blog again when I'm finished with it. Knowing how long it took me on this project, it'll be a while.

Posted by Dianna Dann Narciso at 10:42 AM No comments:


Okay, so there's that. Always Magnolia took an Honorable Mention in the mainstream/literary category in the 23rd Annual Writer's Digest Self-published Book Awards.

Wayward Cat Publishing and its url are right there in the listing! This is the highest honor I've received so far, so no dissing it! I consider myself a proper celebrity now and expect all due deference. Bows, kissing the hand, that sort of thing. I have perfected the princess wave already--I've been at work on that for years and years. All I lack at this point is the tiara. Do they make tiaras with Cross pens on them? Because that's what I want. 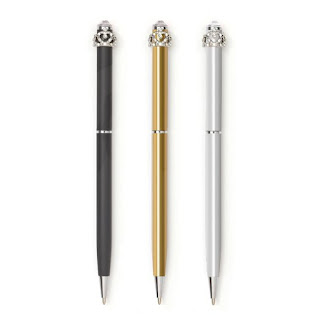 It's a tiara pen! You can get all three of them at Amazon for $28.95 plus $14.95 shipping and handling. It comes from London! I could autograph my books with it at book festivals. I could write up all my notes with it. Use it at the grocery store to cross things off my list.

"Oh, this old thing?" I could say with a giggle. "Why, I use this pen when I can't find one of my many life-size tiaras."

It's true, you know. I never really got over not being born a princess. There's just something wrong with this world I'm in. Here I am in all my princessly finery still having to cook dinner and scrub the toilet. I would like a Jeeves. I have a Roomba; why not a Jeeves to go with it? And my Roomba comes with a remote control, so I don't even have to bend over to turn her on! I want a Jeeves with a remote control. (Doesn't every woman?)

In May, my oldest son is getting married. I should go as a princess. Jeeves and Roomba can come along as my entourage. I'll carry my tiara pen as a scepter. I don't think this dress will be too much, do you? 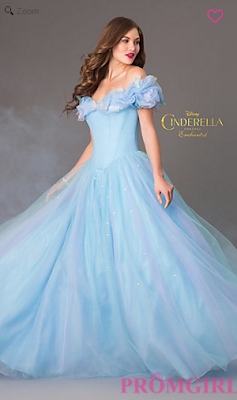 You can get it from PromGirl for only $495. I mean, I can get it there. Because I totally am! I deserve it!

I have put in the hours! I have stomped my feet! My princess pedigree has been stamped, people!

Thank you, thank you all for this high honor.