Try to remember without watching the video...


At the end of this post I will make a yuge announcement! But everything leading up to it is very important. I can't tell you how important all of this is. But it's really, really important.

Some years ago, never mind how long precisely, Marie Osmond sang a song about September. Hold on a minute...let me see if I can find it...aren't the Tubes amazing? Don't we just live in the most amazing--barring Trump--time? Ah, here it is:

This song really has absolutely nothing to do with my post, except that, as I was thinking about writing it, I remembered it. This song, I think, is about getting old and dying, or falling in love with...wait that would a May/December thing...not a May/September thing. So, okay, it's about getting old and remembering when you were younger and then...following...followfollowfollow as Marie says. I don't know...is she saying to go into the light?

(I so wanted to write "whatevs" but that's a slippery slope.)

It has been quite a September so far, that's what I'm getting at. (Egad. I just tried to watch that video and couldn't get through it. That was a long time ago. Maybe we shouldn't look back after all.)

The first weekend of the month saw hubs and me in Atlanta for the Decatur Book Festival. What a fabulous time! Seriously. I sold so many books I started to feel...like an author! Like a real author. Don't worry, I got over it really fast. Like, the very next weekend when we hosted a table at Space Coast Comic Con.

I'm not sure where the idea to try comic cons came from, but it came, and we decided to give them a shot. We did Nerd Fest in Melbourne last spring and it was a good time so we chose a couple more. The results were less compelling. I don't think our set-up is really geared toward the comic con crowd. Not at this time, anyway. 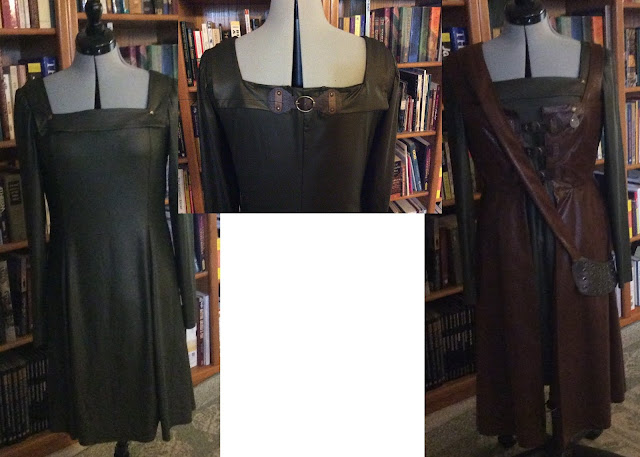 On the left is the dress. It looks like super thin leather. But it's not, of course. It's fabric coated with some kind of rubber, I think. In the back view, you can see that I added the buckle to cover the mistake I made in the over-yoke, which I created because the actual yoke is too wide for my chest. (An expert sewer, I am not...yet.) And on the right is the ensemble with the overcoat. The overcoat fabric also looks like animal skin. Very cool. Here are the fabrics up close:

The pouch is a story in itself. I want to make my own purses and the hardware is really expensive. So I went to Goodwill and found a bunch of super cheap bags. Then I cut them up and saved the hardware: buckles, zippers, D-rings, etc. And one purse not only had this weird front filled with grommets, but it matched the fabric of my dress perfectly. So, I made a pouch out of it. It's what Chai carries magic in. 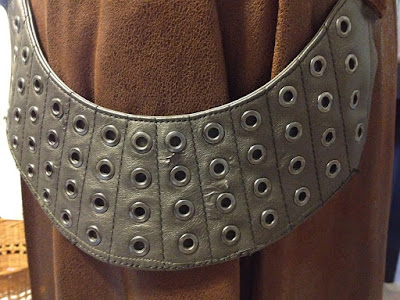 And here is the pirate shirt. Believe it or not, I made the small and still had to take three inches off each side of the thing, just to get it to look like this. 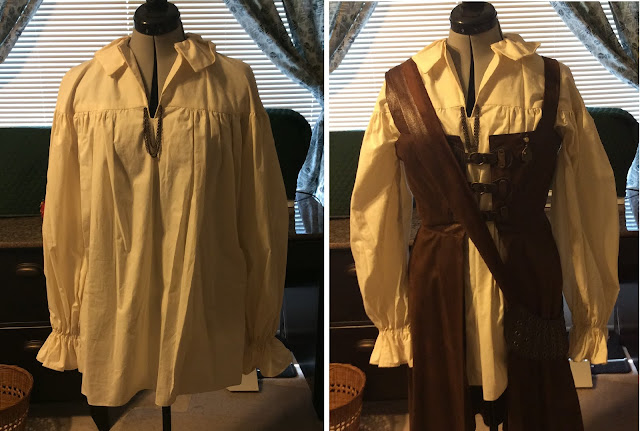 You might be wondering if I plan to post pictures of all my sewing/craft projects on my blog. Yes. Yes, I do. Anyway, I didn't get the pirate shirt finished in time for Space Coast Comic Con and I worked my butt off getting it ready for Treasure Coast Comic Con which was the very next weekend!

But alas, that con was rather dead on Sunday and I just wasn't feeling the costume vibe, so I never changed into it. Pity. I may just have to dress up as Chai as a rule when doing these author gigs. I don't want to have spent all that time screaming at my sewing machine for nothing.

(Not to worry. I figured out what the problem was. My bad.)

Okay, so September thus far has been exhausting! So exhausting that I found myself at Cracker Barrel on Sunday evening scarfing down some Homestyle Chicken and biscuits. Nom nom. I was so emotionally worn out that I ordered some of their famous Double Chocolate Fudge Coca-Cola Cake to go. I get it without the ice cream so I can eat it whenever I'm ready. (I was ready surprisingly soon after eating the chicken and biscuits.)

Anyway, here is what it looks like on their menu. Beautiful, isn't it? You want to see what I got? Scroll, my friend. Scroll. 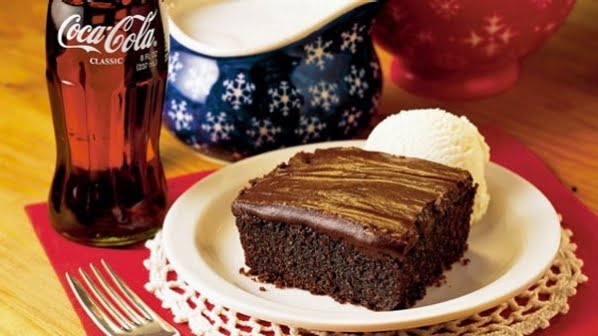 Yep. I got home and opened up my to-go container to have a look and this is what my eyes beheld: Don't get me wrong. I ate it. It was goooooood. But...I can't help feeling it would have been better as the solid, fudgy, thick hunk it was supposed to be.

Which brings me to the point of this post. It's FALL! Do you know what happens every fall? No? Well, I will tell you.

The Epcot International Food & Wine (who cares about the wine part?) Festival!


That's right. This weekend I'll be printing up a list of all the countries with booths this year and highlighting the things I want to eat and new things I'm eager to try. And as usual, I will be blogging every scrumptious and awful detail shortly after, complete with pictures!

I don't care if you like it...it's one of my favorite things to blog about. So, prepare yourselves!

And Epcot! Here we come!