Birding can make you question your very existence...


The red-cockaded woodpecker continues to elude us. People keep posting sightings of this bird at the St. Sebastian River Preserve State Park. Most of them claim to have seen the little bugger about 100 yards along the Yellow Trail. These sightings are marked "confirmed." Whatever that means.

We have our doubts.

We've set out at various times of day. Your best bet for finding one is late afternoon...so they say. So this past weekend we trudged out, yet again, on the Yellow Trail. Heat beating down on our faces, our sunscreen having lost its protective effects much earlier in the day. The sand is thick in some parts and horse hooves have bored holes to trip us up. Beware the cacti. The wind whispers its mocking hymns above us.


About one hundred yards in, we hear it! That twittering, broken cat toy sound of the red-cockaded woodpecker! Alas. It's some tiny perching birds of no consequence.

Along we walk. Bone tired, we keep on. There is hope. Always hope. The bird is out here. We will find it. Eventually, we come to this sign: 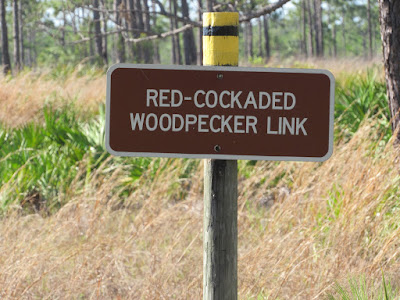 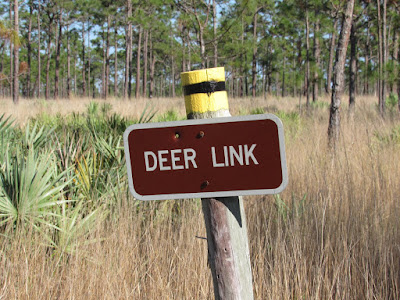 The signs are, as we begrudgingly admit, meaningless. Meaningless! We are no more likely to find woodpeckers down that unimaginably long trek north as we are to find deer here. Still, we keep on our journey. We spot those white ringed trees that laugh at us. Look here, they say. This is where we've pre-drilled holes for those non-existent peckerwoods you're after. Come on, keep going. Keep looking. They're here! Really! Would we lie to you?


When we realize we've come nearly to the levee where we began, we give up, turn around, and head back. Along the main trail we spot a doe and her fawn, brazenly hanging out along the main trail instead of Deer Link where they belong, the rule flouters! 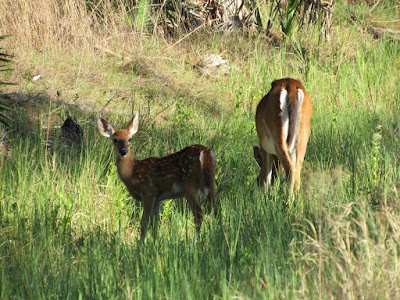 We spot a red-bellied woodpecker. He too mocks us. 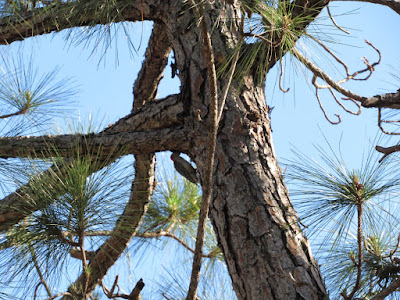 We begin to think the sightings are either unintentionally wrong or outright lies. Maybe those people heard the broken cat toy twitters and just assumed it was red-cockaded woodpeckers. Or maybe they're all just liars! Liars!

There are no red-cockaded woodpeckers here. Red-bellied, yes. Even pileated.

Yes. There are mockingbirds, meadowlarks,

But there are no god damned red-cockaded woodpeckers on the Yellow Trail at St. Sebastian River Preserve State Park!


UPDATE!
We did it! We finally saw the red-cockaded woodpeckers! About 4:20 p.m., on Friday, May 12, some twenty yards onto the Yellow Trail, we heard the high pitched tweets and then the twittering that reminds us of the broken cat toy. Hubs walked into the brush a few feet and I looked and looked and then he pointed. I stepped off the trail and looked some more. And there it was! 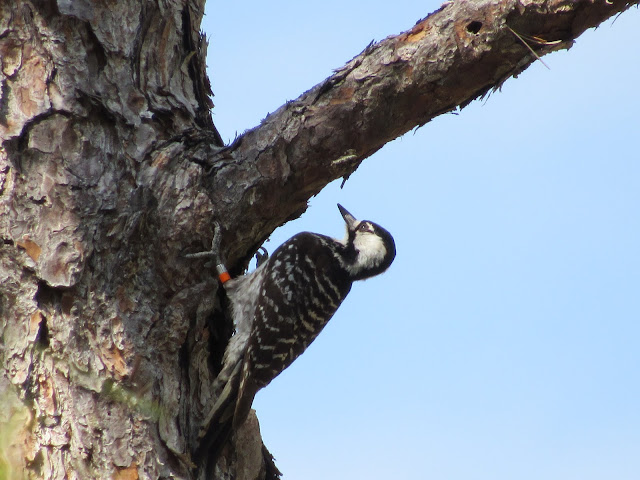 The red-cockaded woodpecker does exist! (And he had at least one friend.)


Posted by Dianna Dann Narciso at 2:13 PM No comments:

How to give up on your dreams and be happy...

Here's the deal (And don't worry about spoilers because this story is as old as Hollywood):

Girl has dream of becoming a star! Boy wants to open his own jazz club! They meet. They don't like each other. But then they do! They fall in love. He gives up his dream for her! She is mad about that. They have a big fight! Then she gives up her dream because she's sick of the rejection. Then her ship comes in and boy convinces her to get on it! Later, she's a star! And waddayou know? He's got his own jazz club! And, oh, how sad...they didn't end up together. Boo hoo.

And everybody screams OSCAR! Wootwootwoot, etc. (It didn't win.)

So, I'm watching it, right? And when girl goes after her ship that's come in, she sings this audition song about going for your dreams and stuff. It's about the creative people and how they keep being creative because they're insane but they can't help it.


And I'm thinking... That's all well and good. But we know that this is a movie. And because this is a movie, she's going to become a STAR!!! Just like she's always dreamed!!! And we're all supposed to be energized to go out there and get our own ship and sail it into success.

But the truth is, more people fail than succeed. And the really hard truth is that, despite what the winners will tell you (and the people selling you books and programs on winning), it takes more than perseverance to succeed.

Yes. It's true enough that if you quit, you definitely won't succeed--not at that particular dream anyway. But it is also true that if you don't quit, you are still likely to not succeed. Very likely to fail, in fact. What the winners don't want to believe is that it takes a lot more than talent and persistence and even hard work to win. It takes a lot of luck. Especially if we're talking about the creative fields. Seriously. Luck. Luck.


The winners don't want you to know that, because they don't want to admit (to themselves) that they were just very lucky. In fact, there are a lot of winners that aren't as talented as you are and who didn't work as hard as you are working. They're just really lucky. Or they know the right people, or the right amount of people. But you can't point that out without the winners telling you that you're just jealous of they're success.

I've been chasing this dream. At first I didn't even realize what the dream was. I thought I just wanted to write books. But it turns out, I wanted to be a STAR!!! I wanted to be a best seller and have readers and money and clout. I wanted to be recognized for my talent. My wondrous, stupendous, insanely fabulous talent!

I didn't know that was what I really wanted until I actually thought I might get it. Instead, I got a shitload of disappointment. I kept trying, naturally, because stardom doesn't happen overnight, right? You have to work hard at it. All the big name writers will tell you that if you keep at it, and if you keep improving, one day, you too can be a STAR! like them.

Bullshit. And yet, she persisted.

Over time, I found that the harder I tried to work, the less I got done. And it got to the point that I hated even thinking about it. My dream had turned into a giant ugly hippo chained to my neck.

"Write it better!" Hippo keeps saying. "No! Not like that! You want a best seller, don't you? Well this isn't going to cut it! Don't write that! Write this! This is what the people want! Wrong! Not that way!"

I hate that hippo.

The thing is, giving up on something like that isn't easy. There's always this needling voice in the back of your head telling you that you deserve something that you might not get. It tells you that if you would just do this or that, or avoid doing this or that, all your dreams will come true. But it's a lie! A big fat hippo lie!

The dream isn't supposed to be about being a STAR!!! It's supposed to be about doing what you love. In that entire film, that girl didn't have a single acting job until her ship came in and she became a STAR!!! What a load of hippo shit. Am I right? (Yes, except for that one job she did herself. We'll call that her self-published work.)

In reality, she'd be working as an actress (or continue the self-publishing for a mostly empty theater) and having a great time. Sure, she'd still have the waitress job. But she'd also get to do the thing that crazy creative people do. That thing that makes her happy, or used to until she thought she might actually want to be a STAR!!!

So there you have it. Give up on that dream. Because that's all it is: a dream. Maybe you'll get lucky. But probably not. In the meantime, just have fun. That's why you started doing it in the first place.

Now, about that hippo...


Posted by Dianna Dann Narciso at 1:41 PM No comments: