I'm about to lay some intellect on you. I'm giving you a heads up here: if it's too much for you, just skim it and I'll sum up briefly after the quote. Here goes:


“The so-called paradox of freedom is the argument that freedom in the sense of absence of any constraining control must lead to very great restraint, since it makes the bully free to enslave the meek. The idea is, in a slightly different form, and with very different tendency, clearly expressed in Plato.

"Less well known is the paradox of tolerance: Unlimited tolerance must lead to the disappearance of tolerance. If we extend unlimited tolerance even to those who are intolerant, if we are not prepared to defend a tolerant society against the onslaught of the intolerant, then the tolerant will be destroyed, and tolerance with them. — In this formulation, I do not imply, for instance, that we should always suppress the utterance of intolerant philosophies; as long as we can counter them by rational argument and keep them in check by public opinion, suppression would certainly be unwise. But we should claim the right to suppress them if necessary even by force; for it may easily turn out that they are not prepared to meet us on the level of rational argument, but begin by denouncing all argument; they may forbid their followers to listen to rational argument, because it is deceptive, and teach them to answer arguments by the use of their fists or pistols. We should therefore claim, in the name of tolerance, the right not to tolerate the intolerant. We should claim that any movement preaching intolerance places itself outside the law, and we should consider incitement to intolerance and persecution as criminal, in the same way as we should consider incitement to murder, or to kidnapping, or to the revival of the slave trade, as criminal.”

― Karl R. Popper, The Open Society and Its Enemies


Okay, so for the tl;dr crowd, Popper was saying this: you can't be tolerant of bigotry and hate without tolerance losing and intolerance winning. You can't truly be "tolerant." It's a paradox.

But it's really very simple when you think about it. You can't tolerate everything. The very idea is ridiculous. The key is to tolerate what ought to be tolerated in a free and just society and shun everything that seeks to undermine the ideals of freedom and justice.

So, in a free and just society, you have to tolerate women having abortions*, college students protesting things you find silly, or the winner not always winning because the system is whacked**. And, in a free and just society, you should not tolerate Nazis roaming the streets, carrying torches and swastikas, chanting derogatory things about Jews. And you should not tolerate police officers killing innocent people and getting away with it. If all of this is not clear to you, what's wrong with you?

I am a very intolerant person.

I will not tolerate (among other things):
bigotry
racism
hate for those who are different
fascism
forced patriotism
bullying
willful ignorance
Donald Trump
Donald Trump supporters
Donald Trump apologists
and, I'm sorry to say, stupidity

I'm sorry about the stupidity part, because I realize stupid people can't help it. Nonetheless, I can't tolerate it.

So, there you have it. I've embraced intolerance. And it feels good.


*This is a civil rights, personal autonomy, and privacy issue. Get over it.
**Until you change the whacked system, of course.

Posted by Dianna Dann Narciso at 1:49 PM No comments: 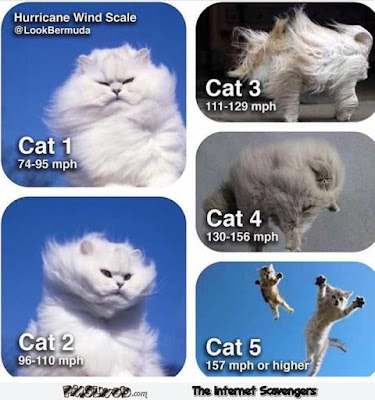 To paraphrase AC/DC: rolling thunder, pouring rain, she's coming on like a hurricane.

Irma is on her way and as of today, the eye of the storm is aimed right at Brevard County, FL, where yours truly lives. I'm one part calm, one part panicked, and one part concerned I won't have enough Ben & Jerry's to get through it all. (I've got a stash of Oreos in case the freezer goes out.)

I'm a lucky person, often. Certainly in the last few days. First, I didn't want to go get gas or money, so my husband came home from work and went back out again to do it for me. Maybe that's not luck, but I'm chalking it up.

Second, I needed water. My local Publix was out. My BJ's was out (Except for some kooky flavored waters. No thank you.) And Walmart was out (except for Fiji Water and I'm sorry, but I'm not paying for Fiji Water). Then the next day I went back to BJ's and I saw people coming out with brown boxes that said Zephyrhills on them. Six, eight boxes per person. (Greedy bastards.) I hurried in and managed to get myself one box (That's right ONE box people, because I wasn't the only poor soul gathered around there, trying to get the last few off the pallets). I'm sure they'll keep bringing pallets of water out as the days wear on.

Then I decided I wanted more granola bars. Walmart had none. But, as I was uptown for lunch with hubs, I decided to pop over to the other Publix and sure enough, they had my favorites. I got a few boxes, the above mentioned Oreos, some Cracker Jack, and as I was looking for flashlights (nobody had any flashlights!) I was at the back of the store when they rolled a cart full of water out from the stockroom and those of us lucky to be in the right place at the right time were allowed to take some.

"We won't make it to the shelf with them," the stock dude said. He was right.

Then I went over to Lowe's and got two really cool flashlights. The only downside is that they take AAA batteries and I'd already bought a dozen Ds at BJ's. That's the trouble with BJ's. You have to buy in bulk. I was forced to get about a thousand paper plates and about five-hundred paper bowls. What am I going to do with all of them? I refused, flat out, to purchase four-hundred plastic cups! Forget it. Luckily enough, I was able to get some at Publix.

I'm all stocked up on Diet Coke, too. So....emergency averted, right?

Odds are, we're not going to get hit as badly as it looks right now. The odds are that way because that's the way it usually turns out. Brevard County is in some sort of sweet spot. We had one, back in 2004, the Year of the Hurricanes, that was barreling right at us at a category four or five. We bugged out and had the worst experience ever. That stupid hurricane hit Brevard County as a Cat 2. (Nonetheless, there was quite a bit of devastation in our area. I don't mean to make light of other people's experiences.)

Now, I'm not saying that I'm not bugging out because I think that's going to happen again, or that I think we're invincible, or that I just don't want to leave. But I'm implying it.

We've got storm shutters to put up and a garage door that no category of wind could ever budge. A weak and old roof, to be sure. But we're up on a bit of a rise where our neighbors are a tad down below.

Speaking of sitting up on a hill of sorts. As I was coming home from Lowe's I noticed that the right lane of traffic was at a dead stop and the left (my lane) was moving along just fine. I couldn't figure out what the deal was. They were all just sitting there as we moved past them. They weren't even trying to get into our lane. Was some huge school getting out early? No. There must have been an accident in that lane. No, they'd all be moving into our lane.

It turned out that these people were in a miles long line of cars trying to get into a local park for free sandbags! Holy Cows!

I didn't get any sandbags. I think we'll be okay. It could be bad. But chances are, for us, it won't be catastrophic. Unfortunately, for others, it may very well be. In fact, it already has been. So, we'll be riding it out and hoping for the best for everyone in Irma's path.

And let's not forget that José (wtf, José ) is right behind her.

I'll try to get the Wayward Cat Book News out as usual on Tuesday. And if my electric holds out, I'll be online through the storm.


Posted by Dianna Dann Narciso at 9:13 AM No comments: