Sea World's Food Festival has nothing on Epcot's... 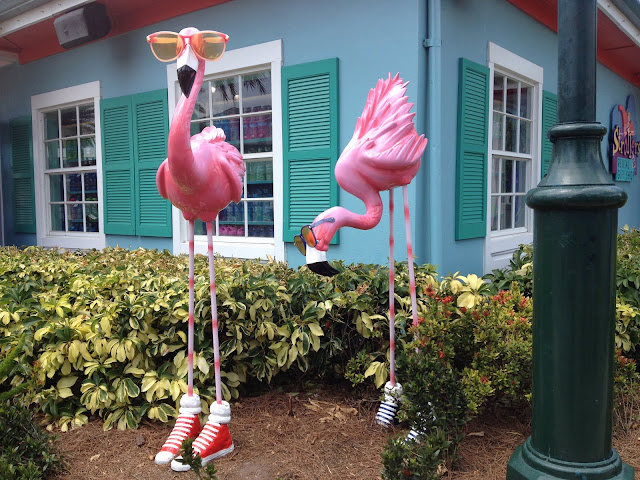 Well, apparently Sea World saw how fabulous the Epcot Food & Wine Festival is and had to have one of their own. 2018 is the second year for Sea World's Seven Seas Food Festival. They've got a long way to go to be Epcot.

Sure, Epcot has twenty-two years on Sea World, but it seems to me if you start out this bad, your chances aren't good in the long run.

On the plus side, the portions were huge. But so are the prices. We purchased a supposedly money-saving badge that gave us fifteen items for $60. I didn't keep track of the prices, but they were all at least $5 and most were more like $6.50. So, I guess the badge did save us money.

But the booths were really unorganized and poorly run. And the food wasn't great, either. Here's a rundown on what we had (so you don't have to): 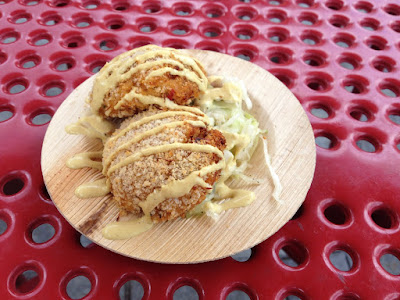 We really liked this one. Lots of crab (well, it looked like crab). But very spicy. We were told that the serving is usually one crab cake, but they were small today so we got two. Jiminy.

*That's pronounced HI-cuh-muh isn't it? Because I keep thinking je-CA-muh. 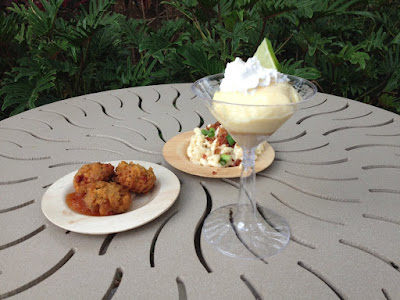 The conch dish was sort of confusing. The conch had absolutely no flavor, of course. But the pineapple salsa, if that is what it was, was delicious. There was something else on the plate, however, that looked like pink tartar sauce. Very spicy. We liked it, overall, considering it had little flavor.

The shrimp mac-n-cheese had so little flavor it could have just been creamy macaroni. There was a shrimp in it. One shrimp.

The Key lime martini was, basically, key lime pie in a plastic martini glass. Very nice. We ate all of that. 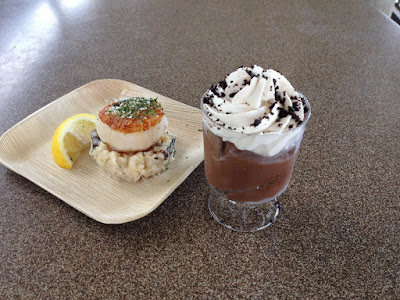 Okay, first of all, the description is sea scallops...plural. But what we got was one huge scallop. (Hubs is certain it's a fake scallop. You know, circular plugs of stingray. And why not; they've got a tank full of sting ray right there in the park.) That said, it was cooked perfectly, but had no flavor--except for salt. But it's a scallop, so how much flavor was it going to have? Chef Ramsay would have been so pissed about the risotto! It was icky mush with a weird flavor. I can hear him cursing now.

The mousse was excellent! (You knew that, didn't you?) I should have spent a few credits on more of that. 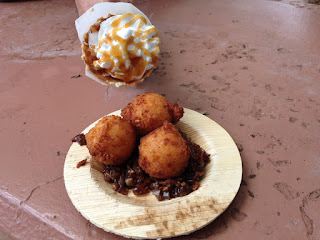 The hush puppies were supposed to be served with honey butter, but we got something like a BBQ salsa instead. It was rather tasty, if barbecue is what you want with your hush puppies--and it's not. The puppies themselves were okay. Very mild with a hint of sweet corn. 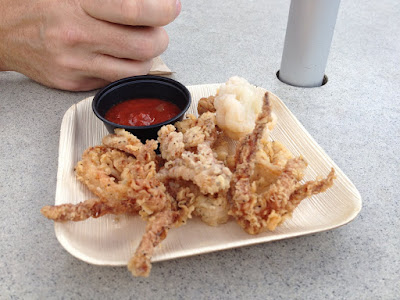 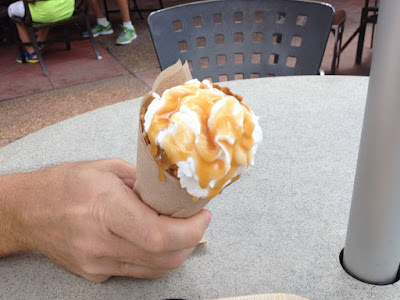 Okay, well...I think it was calamari. But it had no flavor. Not even a decent "fried" flavor. The yuzu was clearly canned tomato sauce. And the pickled vegetable was a piece of cauliflower.


The pear cobbler was served in a waffle cone. The cone seemed to be a theme. It was wrapped in a paper napkin and dripping caramel, or whatever that was. Hard to handle and hard to eat. Large pieces of pear don't make for eating without a fork, after all. But when you put your fork in, all the whipped topping and caramel just fall out. Whoever put this together wasn't thinking of the diner. Form over function, am I right? So, anyway, this was basically pears in apple pie spices. It was very sweet. 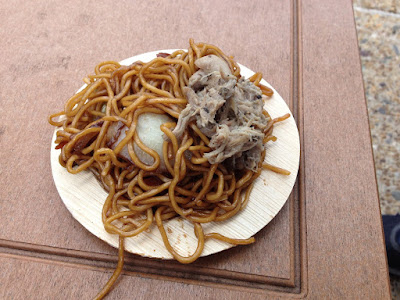 Undercooked lo mein noodles with some juicy, but tasteless, duck on top. I don't recall what that white thing is, there in the middle of the lo mein. Probably a vegetable of some sort. The lo mein was inedible, so we didn't find out. 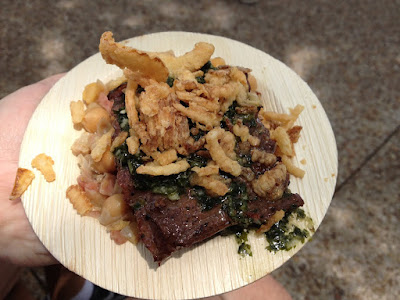 Well, the skirt steak was very nicely cooked, with a rather nice, if not extremely mild, flavor. The chimichurri was excellent--tasted like garlic butter. Just a bowl of that, please. The "garbanzo frito" was just some garbanzo beans. 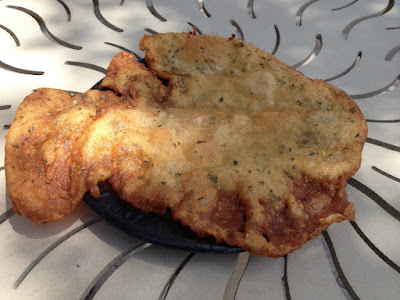 This was in the special Latin Inspired Cuisine section that didn't run during the entire festival. We got the bacalaitos, a crispy, salted, codfish pancake. Funny though, there was also a sign at the booth that said "funnel cake." And that's what it felt like. Unfortunately, we were right there when they pulled this huge, flat, cake out of the grease and put it on a plate for us. It was so greasy, and so salty, it was nearly inedible. Hubs had one bite and that was it. I took two. 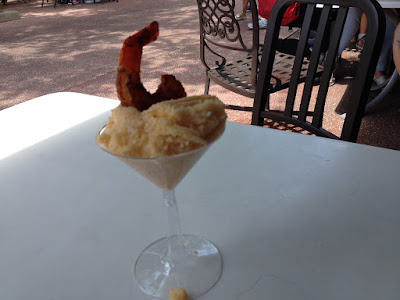 This was so disappointing I can't tell you... One piece of tasteless shrimp on top of another martini glass filled with bland, mushy grits. It's like they didn't even try. 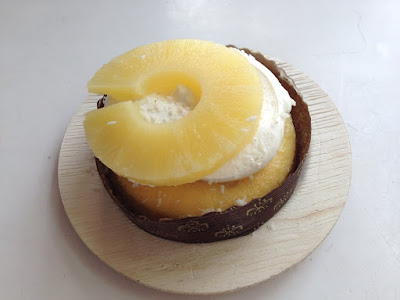 OMG! This was fabulous! It was delicious pineapple cake, with creamy whipped topping and a slice of pineapple. We at the whole thing, even though we were stuffed.

So we ended on a good note, eh?

Anyway, the festival also includes concerts and that day it was somebody called Nicky Jam. I thought it was a girl. But I looked him up and he's some reggaeton (like...Latin hip hop) guy from Massachusetts. (Massachusetts?!?!) I don't like the look of him, I'm afraid. Big face, beady little eyes. I could see him on the evening news, if you know what I mean.

He was supposed to go on at five but people were already there claiming seats at noon. And when we left at three, the place was packed. And still, people were streaming through the entrance. They were going to have to watch from the other side of the pond. Apparently this guy has fans. 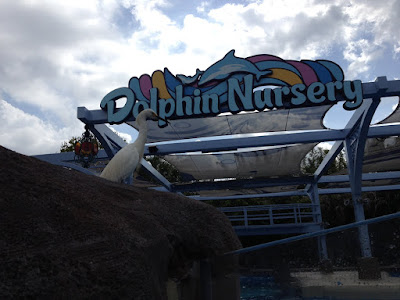 We did all the usual stuff, saw some dolphins, pet and fed stingrays, fed the sea lions, saw manatees, etc. It was a fun day. But despite what some people say about Epcot's food festival going downhill, it's still ten times better than Sea World's.

Posted by Dianna Dann Narciso at 3:28 PM No comments: